LI Super Bowl champion, Geneo Grisson is a retired National Football League (NFL) player. The American football defensive end finished his collegiate career at the University of Oklahoma. In the 2015 NFL Draft, he was picked by the New England Patriots with the 97th overall in round three. Further, he had a stint with Indianapolis Colts and New Orleans Saints.

Hutchinson, Kansas native, Geneo Grissom was born on 4th June 1992, to Kimberley Wallace and Eugene Grissom. His star sign is Gemini. The twenty eights years old is an American by nationality who came from the Afro-American ethnic background.

How Much Is Geneo Grissom's Net Worth In 2021? NFL Career Earning

Geneo Grissom, a former American football defensive end has earned a good deal of money through his five seasons in the NFL for New England Patriots (2015-18), Indianapolis Colts (2018), and New Orleans Saints (2019).

Geno Grissom is married to his college sweetheart Haley Eastham Grissom. The couple met at the University of Oklahoma in 2010. Following years of a romantic affair, Geneo finally poped a question on 14th February 2014. They tied the knot on 20th July 2015. 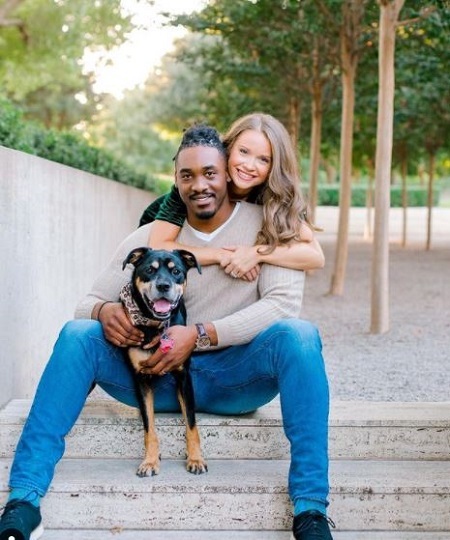 Mr. and Mrs. Grissom is currently parenting their four legs baby. They often share adorable pictures via their respective account.

On 28th January 2021, they were featured in the House Hunters episode "Wow Factor in Dallas".

As a senior at the University of Oklahoma, Geneo earned an honorable mention for the All-Big 12 following his 39 tackles and 3.5 sacks in 2014. Throughout his stint at Oklahoma, he had 88 tackles, 8 sacks, 2 forced fumbles, 3 fumble recoveries, with 2 interceptions playing in 39 games, starting 12.

In the 2015 NFL Draft, the New England Patriots picked Grissom in the third round with 97th Overall, becoming the 14th defensive end selected that season. He made his professional debut in the Patriots' season-opener against the Pittsburgh Steelers where he assisted on one tackle during their 28-21 win. On 3rd September 2016, he was released by the team as part of final roster cuts but was signed to the practice team the following day. On 15th October, he was promoted to the active roster.

On 2nd September 2017, he was again released by the Patriots and was signed to the practice squad the next day then promoted to the active roster on September 22, 2017. On 9th November 2017, he was released from the team, resigning to the practice squad and back to the active roster on 2nd December 2017. On November 6, 2018, Grissom was waived by the Patriots.

On 1st January 2019, Grissom signed to the Indianapolis Colts. On 13th May 2019, he joined the New Orleans Saints and was released during the final roster cuts on 30th August that year.