Guilherme Arana is a professional football player from Brazil and currently plays in the Brazillian top league, Brazillian Serie A. He plays in the left-back position for Atletico Mineiro and has been playing for them since 2021. He also played with the team for the 2020-21 season but he was on loan from Sevilla. He wears jersey number 13 for his club.

The Mineiro's left-back won the Campeonato Brasileiro Serie A 2021 with his club Atletico. The same year, Mineiro also won the Copa do Brasil and Campeonato Mineiro, a state-level league.

Arana's Bio and Personal Information, Who are his parents?

Guilherme Antonio Arana Lopes, also known as Guilherme Arana was born on April 14, 1997, in Sao Paulo, Brazil. According to astrologers, his birth sign is Aries.

He was born to his father Augusto Lopes and his mother Cintia Arana. He has mentioned his mom and dad several times on his Instagram. He always appreciates them on his social media. 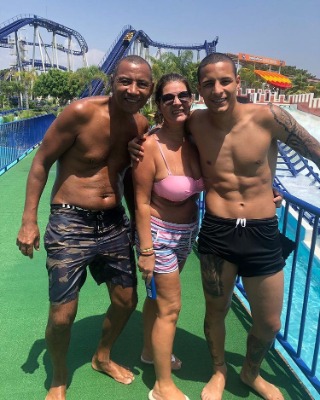 Guilherme with his mom and dad SOURCE: [email protected]

Read: Who is Denis Suarez? His personal Info, Family, and Early Life

He also has a brother whose name is Gustavo Arana.

He appreciated his family members saying,

"I thank my family who, through my parents and my brother, gave me all the support and support I needed to get here and my wife and son for being always by my side"

Guilherme's height and weight: How tall is he?

What is the net worth of G Arana? His market value, salary and Contract with Atletico

According to the sources, Guilherme Arana's estimated net worth is $2 million approximately. His property includes all his money, earnings, cars, houses and assets.

He mainly earns by laying football for a different top club. Guilherme Arana in front of an airplane SOURCE: [email protected]

He also earns from various sponsorships and brands deals.

Salary and Contract with Atletico

According to Salary Sport, he is one of the top paid players in his current club Atletico Mineiro. His yearly salary at the club is £780,000 per year. And his weekly wage is £15,000.

As per the same source, the highest-earning Mineiro's player is Brazillian midfielder Hulk who earns £2,236,000 per year. And the second highest-earning players are Diego Costa and Vargas who earn £1,612,000 per week.

The market value of Guilherme Arana is 11 million pounds in January of 2022 according to transfermarkt.

It was just 5 million pounds in May of 2018 while he was in Sevilla.

Guilherme is also sponsored by various brands. Some of his major sponsors are Nivea Men. 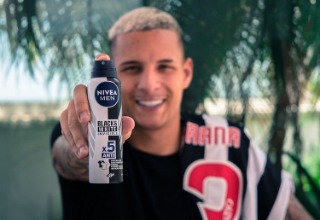 We can see him promoting different products of the brand.

"And to take care of the white mantle only with NIVEA Black & White 5x Anti, which protects against odor, sweat, stains, residues and irritation. In addition to having all NIVEA's hydration care."

Relationship Status of Arana || Who is he married to?

As per sources, Arama Guilherme is currently living in an open relationship with his wife Gabriele Melchior. The couple has been married for more than 3 years as of 2022.

It is not sure when the pair exactly started dating and when Arana met his ex-girlfriend for the first time. But it was in 2019 when the lover started sharing their photos. But they have already started dating at that moment. At that time, the pair were seen in a Halloween customer and the Brazillian defender said, "Till death do us part".

After that, Gabriele's boyfriend has mentioned her on different occasions as a Mother to his son.

In December of 2021, he celebrated Christmas with his family. He mentioned how he miss last year and said,

"First Christmas by your side, last year I was anxiously waiting for you to arrive and now you are here fulfilling my dream and making my Christmas happier."

Who is Arana's girlfriend Gabriela?

Gabriela Melchoir is famous for becoming the wife of the Brazillian footballer Guilherme Arana. She is also an Instagram model where she posts different photos. She is quite famous on Instagram where she has more than 43,000 followers. Her Insta Id is @gamelchior.

Read: Who is Sam Adekugbe dating? His girlfriend and dating life

Guilherme and Gabriela: Parents of a child

Arana Guilherme and his partner Gabriela are blessed with a child, a boy. 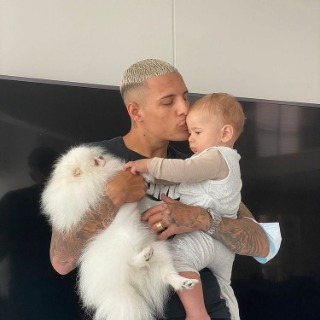 In April of 2021, the couple announced that they have given birth to their child whose name is still not revealed. On the occasion, Arana expressed his happiness and said,

"Welcome Guilherme I love you so much Inexplicable love I will take care of you forever son. Thank you my God for putting this beautiful thing in my life"

Since then, he has shared his child's photos many times.

He is highly active on his Instagram and frequently posts about his games, training and time with friends.

His Instagram username is @guiarana and has more than 1.3 million followers. His Insta is filled with photos of himself, and his games and training.

One thing his fans won't ignore seeing in his social media is his fishing. He often shares photos of himself with big fishes.