Denis Suarez is a professional football player from Spain and currently plays in the Spanish top league, Laliga. He plays in the midfielder position for Celta Vigo and has been playing for them since 2019. He wears jersey number 6 for his club.

He previously plays for the Spanish club, Barcelona before moving to Celta. With Barcelona, he won 2 Laliga in 2017-18 and 2018-19 seasons. He is also a 2-time winner of Copa Del Rey as well as Supercopa winner in 2016. In the 2011-12 season, he was named Manchester City's Young Player of the year.

Celta Vigo's midfielder Suarez has been playing for the national team of Spain since 2016. He made his debut in May of 2016 against Bosnia and Herzegovina. In 2012, he won the UEFA European Under 19 Championship with Spain. And also he was the runner u f the UEFA Under 12 Championship in 2017.

Who is D Suarez? His personal Info, Family, and Early Life

Denis Suarez Fernandez, famously known by the name Denis Suarez was born on January 6, 1994, in Salceda de Caselas, Spain. As per astrology, his birth sign is Capricorn.

He was born to Spanish parents whose name is still not revealed. His dad was a businessman while his mom was a professional hairdresser. 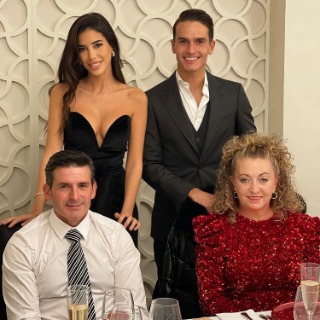 Denis Suarez with his mom and dad SOURCE: [email protected]

Read: Who is Patrik Laine?

As per sources, his mom had to take a break from her saloon to get her son to the training camp. He sometimes posts about them on his Instagram and praises them for their sacrifices.

Denis started playing at just 3 years of age. He was a very talented kid from his childhood and used to play at the local level. In 2008, Porrino Industrial included him in their youth team. After that, he started playing professionally.

Suarez grew up along with his sister whose name is not revealed yet. He has no brothers of his own.

His weight is around 69 kg and has short black and brown hair.

After playing for Industrial Porrino for a year he was scouted by Ceta Vigo. From 2009 to 2010, he played for Celta Vigo which was the turning point of his career. He was promoted to the Celta Vigo B team in 2010. 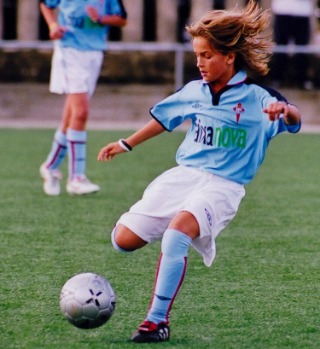 Following his impressive performance for the Celta, Manchester City bought him in 2011. But he was a very young player who did not get his chance to play for them.

Later he transferred to the Barcelona B team where he scored 7 goals in 36 games including a massive impact in the id field.

Marcus's Net worth and Luxuries

According to sources, Denis Suarez's net worth is estimated to be $12 million approximately. It includes all his properties, assets, incomes, cars, houses, etc.

His major source of income is from his profession of playing football for different top clubs including Manchester City, Barcelona, and Celta Vigo. 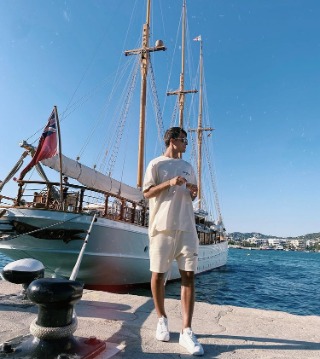 Denis Suarez in front of a yacht SOURCE: [email protected]

He lives a luxurious lifestyle with his girlfriend in Spain. He likes to visit different places and posts them on his social media.

Salary of D Suarez with Celta and Barcelona

His salary has been increased massively after joining Barcelona in 2017. Before that, he used to earn just £832,000 per year for Villareal CF. But at that time, he was just 21 years old.

Market Value of Sam A

According to transfermarkt, his market value at Denis S is 10 million pounds in 2022.

His market value has decreased after 2018. At that time he was in Barcelona and it was more than 18 million pounds.

Celta Vigo signed him from Barcelona in 16 million pound fee. Previously, he was also on loan to Arsenal.

Who is the outfitter of Denis Suarez?

As per transfermarkt, his current outfitter is Nike.

One of his major sponsors is Nike which is a manufacturer of sports accessories like boots, jerseys and other particles. 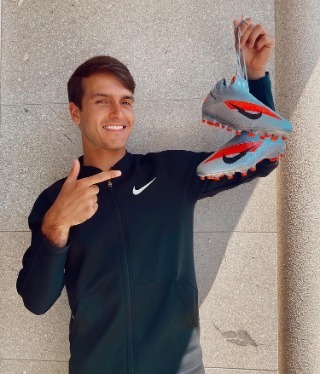 Denis Suarez is living his lavish lifestyle which can be reflected by his cars.

Currently, he is in love with his black car whose model is not known at the moment. He is frequently seen with that automobile in the streets. And also likes to flex that car on his Instagram.

In 2016, he was also one of the players of Barcelona who got cars as a gift from their club.

As per the source, Denis Suarez picked the Audi Q7 3.0 TDI (272 CV), which is the same car picked by his teammates Luis Suarez and Lionel Messi.

According to sources, it is confirmed that Denis Suarez is in a committed relationship with his girlfriend Nadia Aviles Garcia. The couple has been together for more than 4 years in 2022.

The pair started dating in 2018 and since then, the pair has occurred with each other on different occasions. At that time, Denis was in Barcelona and Nadia is also from Barcelona. 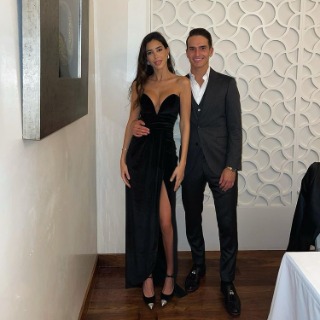 Read: Who is Milan Borjan married to? His Married Life with Snezana

She used to make her appearance in her boyfriend's game. Attending together, she also established with Coral Simanovich. She is the girlfriend of Suarez's teammate Sergio Roberto.

Nadia is quite supportive of her love always encouraging in his highs and lows. They often mention each other on social media.

As of now, the couple has not been married and has not disclosed any details about their future plans to the public.

No, Denis Suarez is not married to his girlfriend as of 2022. They have already dated for more than 4 years and are planning to marry each other.

On June 6, 2021, Suarez posted a photo where he was seen with one knee down and catching th hand of Nadia. And Nadia was seen smiling. Denis took his girlfriend to a candlelight dinner on the beach other photos the lovers were seen having a candle dinner at the beach.

And in the caption, Denis posted,

"She said Yes (with a love emoji)"

It seems Denis proposed to his current partner and she accepted to marry. Now, they must be planning on tying their knot with each other. 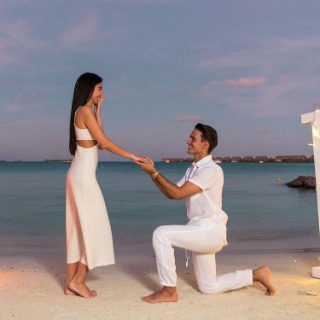 Till now, they have not revealed when and where they will get married. But they must be planning their wedding ceremony.

Who is Denis's girlfriend Nadia Aviles?

Nadia  Aviles Garcia is famous for being the girlfriend of famous footballer Denis Suarez. She is also an Instagram model and celebrity. 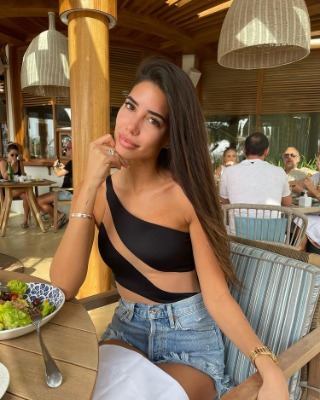 Like her partner, she is also quite famous on Instagram. She has more than 221,000 followers in her Insta Id with the username @nadiavilesgarcia. She shares her beautiful photos and sometimes with her love to her fans.

Before Nadia Garcia, the Spanish midfielder was in a romantic relationship with his girlfriend Sandra Montoto. He dated his ex-wife for a few years before getting splitter in 2018.

And talking about past relationship history, Denis is not the only one Nadia has dated. Before Denis Suarez, it was rumored that she used to date Enzo Zidane, the son of French footballer Zinedine Zidane.

Though they tried to keep it private, they could not hide it from the fans and critics.

Denis Suarez is an active Instagram user where he posts about his daily life, training and with his girlfriend. His insta id is @denissuarezfernandez and has a fan following of more than 4,000 followers.

He also rises Twitter where he has more than 549,000 followers. He is using Twitter with his Id @DenisSuarez6.