Glover Teixeira was born Glover Lucas Teixeira on October 28, 1979, in Sobralia, Minas Gerais. He has yet to share a word about his parents. Glover is of Portuguese descent and holds Brazilian nationality. Talking about his physical appearance, Teixeira stands six feet and two inches tall and weighs 93 kg.

Glover Teixeira has an estimated net worth of more than $2 Million. He credits most of his net worth to his successful career as a UFC and MMA Fighter. Teixeira has been fighting in the professional UFC event since 2012. Last season, The fighter took home a whopping amount of $550,000, earning from just two UFC events. Glover earned $295,000 from his match against Anthony Smith and $255,000 from Thiago Santos's Match. 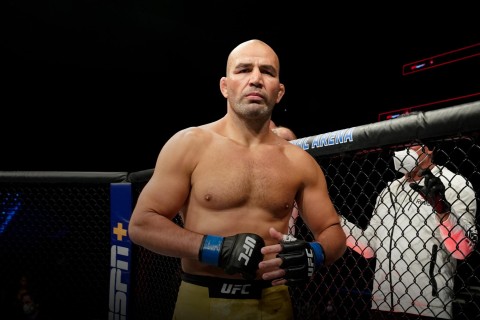 Glover has been competing in the UFC since 2012 SOURCE: UFC

Who is Glover Teixeira Married To? Know About His Wife and Relationship Status

Glover is very private about his love life. Although He is an active social media user, Teixeira rarely shares about his wife. Glover is married to his longtime girlfriend, Ingrid Teixeira. He has not shared about their wedding. In August 2020, The fighter posted a video of his life partner wishing for their anniversary. They keep going to holiday destinations. The couple is yet to welcome a new member to the family.

Glover started training for the MMA in the late 1990s. He won the 2009 Brazilian ADCC trials in the under 99 kg division and came second in the 2011 Brazilian ADCC trials. The fighter made his professional debut in 2002 and lost the match in WEC 3.  Teixeira signed with the Ultimate Fighting Championship in 2012 and has been with it.

Glover won his debut UFC match against Kule Kingsbury via a TKO. He lost his first UFC match in April 2014 against Jon Jones. In the next six years, The fighter has lost three more matches winning the rest. Since 2018, Teixeira has not lost a single game and has a record of 32-7 until mid-2021. Glover is set to face Jan Blanchowicz at UFC 266 for UFC Light Heavyweight Championship in October 2021.

Read More.Weight Cutting Can Do A Serious Harm: Johny Hendricks Said My kidneys shut down’ after the last time I fought at 170, In The MMA Hour