Anthony Smith is an American mixed martial artist currently competing in the Ultimate Fighting Championship (UFC) Light Heavyweight division. He has been competing professionally since 2008. He was signed to UFC in 2014 but was released from the organization only to be re-signed in 2016. He is the current rank #3 of the official UFC light heavyweight rankings.

Smith had a difficult upbringing being raised by a single mother and was working as a concrete finisher until 2016. He has been able to find success in MMA and has made a living out of his career at present.

Anthony Smith Net worth and Earnings

Anthony Smith's net worth at present remains under review. He has found relative success in his career in MMA and as a fighter for one of the most successful fighting promotion UFC, he makes a good living off it. 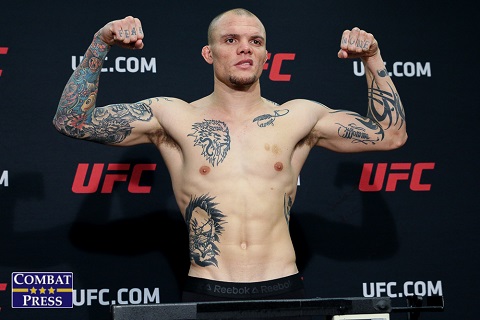 He has reportedly made more than $609,400 through his MMA fights. Due to the lack of information regarding his personal assets and past financial earnings, his net worth is hard to estimate.

Anthony Smith, 30, is a married man and is also father to three children all of them are daughters. He married his longtime girlfriend but there are no details about his wife turned girlfriend.

Anthony has also never disclosed any information about his wife and how his relationship with her started. He often posts pictures of his family on his Instagram account.

Anthony Smith was born on July 26, 1988, in Corpus Christi, Texas, United States. Raised by a single mother and a grandfather. Smith dropped out of high school in the middle of the senior year and began working as a full-time concrete finisher. He continued with the job until 2016.

The career of Anthony Smith

Anthony Smith began competing in mixed martial arts competition. He began his career in 2008 fighting for local promotions during which time he had a professional record of 13-7. He had fought against veterans fighters like Logan Clark, Eric Schambari, Jack Hecht and Jesse Forbes during his fight at the local level. He later signed with the Strikeforce promotion.

On July 22, 2011, Smith made his debut at Strikeforce Challengers: Bowling vs. Voelker III facing Ben Lagman replacing the injured Louis Taylor. He won his debut match with a KO in the second round of the fight. He faced Adlan Amagov in the next fight on November 18, 2011. He lost the fight with a knockout in the first round

Anthony Smith and Lumumba Sayers faced against each other on August 18, 2012, at Strikeforce: Rousey vs. Kaufman. Smith came out victorious in the fight winning with a submission in the first round. His last fight at the Strikeforce was against Roger Gracie on January 12, 2013, which ended up in a second-round submission loss for Smith.

Smith moved to UFC after the end of Strikeforce. His debut fight was at UFC on Fuel TV 10 held on June 8, 2013, against Antonio Braga Neto. Neto won the bout with a kneebar submission in the first round. Smith was released from the UFC following the result of the fight.

Anthony Smith's next move was to the Bellator MMA fighting promotion. His first fight with the organization was on April 18, 2014, against Victor Moreno. He was able to defeat Moreno with a triangle choke submission in the second round of the fight. His next fight saw him facing Brian Green on October 17, 2014. The fight went the full length with Smith emerging victorious via unanimous decision.

After spending some years with other promotions, Smith was once again re-signed to the UFC on February 16, 2016. His first fight after the re-signing was against Leonardo Augusto Leleco on February 21, 2016, at UFC Fight Night 83, where he was replacing for the injured Trevor Smith. Smith won the fight with the unanimous decision.

For his next match, Smith was scheduled to face Scott Askham on July 8, 2016. However, Askham pulled out of the bout and in his replacement, Smith fought against Cezar Ferreira. Ferreira came out on top between the two in the fight and was declared the winner of the fight via unanimous decision. His next opponent was Elvis Mutapcic who he fought on December 3, 2016. Smith was able to win the performance of the Night bonus winning the fight via TKO in the second round.

Anthony Smith defeated Andrew Sanchez and Hector Lombard in the next two fights and was on 3 wins winning streak. The streak was cut short by Thiago Santos on February 3, 2018, at UFC Night 1125. Smith lost the match due to technical knockout but was able to receive Fight of the Night bonus along with Santos.

Anthony Smith faced Volkan Oezdemir on October 27, 2018. The fight lasted till the third round where Smith was able to win with a submission. He later faced the Lightheavyweight champion, Jon Jones, at UFC 235 on March 3, 2019. He lost the championship bout via decision.