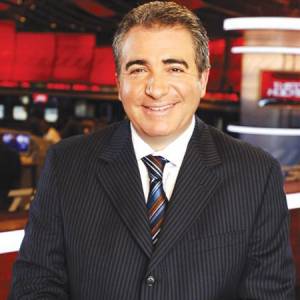 Gino Reda is a famous sportscaster currently working for TSN. Known for his appearance in That's Hockey, Gino Reda is working for the show since 2001. Further, he worked as a host of ESPN's SportsCenter for fourteen years.

The resident of Canada, Gino Reda, reportedly earns around in the range of $62,000, as his annual salary from the network, and as of 2018, he reportedly has an estimated net worth of over six digit figure. He is currently married to his wife Shanon and has 3 children with her.

Gino Reda was born on August 8, 1960, in Peterborough, England. He holds an English/Canadian nationality and belongs to White ethnic group.

In 1979, he graduated from the Kipling Collegiate Institute. He played varsity football in high school and wrestled. He is an alum of the Ontario Bible College (now Tyndale University College and Seminary).

Gino Reda Net worth and Salary

The English/Canadian sportscaster/anchor Gino Reda has an estimated net worth of six digit figure. As of 2018, the reporter receives an annual salary in the range of $62,000 from his successful reporting career with TSN. Further, TSN reporter receives an added sum of money from his radio and TV guest appearances as a sports pundit too.

More specifically, the median salary for a TSN sports network reporter is 62,000 dollars. And as one of the popular names of the network, the wage of Reda is higher than the estimated average wage.

Some of the highest earners of the TSN network are Michael Landsberg, Chris Cuthbert, Jim Hughson and many more.

At the age of 19, Reda and co-host Frank Gianonni anchored a weekly live program called "CitySports." During the two years of the program, the show won the " Best Live Sports Program, North American Cable Award.

In September 1986, Reda was hired to hold a full-time position by Sportsline network to work along with Jim Tatti. In the summer of 1988, he joined TSN as a reporter for the Summer Olympics of 1988 in Seoul, Korea.

The holidays are all about spending time with family.

But sometimes, juggling family responsibility can get a little hectic.

Stick tap to my pal @frank_seravalli for powering through today. #TalkToTheHand

He has been the host of That's Hockey on TSN since 2001, after working 14 years for the show SportsCentre. During his time with TSN, Reda hosted numerous international events including the Football World Cup, Rugby World Cup, numerous Olympic Games including Vancouver 2010.

Gino is a married man and as of 2018, he is happily married to his wife Shanon. Further, the couple is blessed with 3 children named Beck, Luke, Kaylee.

I make a living describing magical moments, but this one rendered me speechless. #lawschoolgrad #prouddad pic.twitter.com/abD0BhaL8i

His oldest Luke son is currently studying medical science at Columbia Medical School and his daughter Kyle is working as an Articling Student at Mathews Dinsdale and Clark LLP.