Apart from playing for several football clubs, he has represented Brazil at the 2016 Copa America Centenario.

Gil was born to Brazilian parents on 12 June 1987 in Campos dos Goytacazes, Brazil. He was interested in playing since his early childhood days.

He began his playing career with Brazilian football team, Americano Futebol Clube in 2001.

Gil’s Net worth and Salary

His annual salary which he receives playing with Shandong Luneng is around $ 4 million and has the market value in the region of £4.95 million as of 2018.

Gil’s net worth could be more than $7 million looking at his professional playing career. 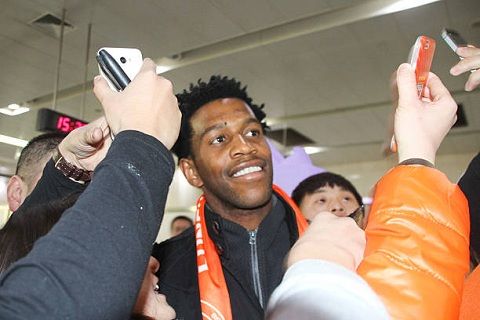 He is currently his enjoying his stay in China. He might also have the endorsement deal which is the secondary source of his earnings. However, he has not disclosed any details yet.

After playing for the youth team of Americano Futebol Clube, he joined fellow Brazilian side, Atlético Goianiense in 2008. He made over 40 appearances for the club and scored 2 goals and went on win Brazilian Serie C league title in 2008.

In 2009, he signed with Cruzeiro Esporte Clube and after making  58 appearances and contributing one goal to the club he let the club in 2011.

He was able to win the Campeonato Mineiro in 2009.

Gil moved to France and sign with the French second-tier football club, Valenciennes in 2011 and played in 40 matches and scoring 2 goals for the club. After his spell at  France, he transferred back to Brazil and signed with  Corinthian in 2013  and made over 100 appearances and scoring six goals to the side.

He was the part of the successful team that went on win Campeonato Paulista, Recopa Sudamericana in 2013 as well as Campeonato Brasileiro Serie A in 2015.

After a successful stint with the Corinthian club, he is currently playing for Chinese Super League club, Shandong Luneng whom he signed in 2016.

He plays with the fellow Brazilan teammate, Diego Tardelli at the club.

He made his debut for Brazil national team in 2014 and has represented at the 2016 Copa America Centenario held in America.

Gil, along with players such as striker, Neymar as well as the fellow defender, Filipe Luis, is expected to play at the FIFA World Cup 2018 in Russia.

Gil is currently 30 and has a height of 6 feet 4 inches as well as weighing about 89 kg. It has been reported that Gill is married to his girlfriend, now wife.

The couple is blessed with two children; a son named Carlos Gilberto Nascimento Silva and a daughter.

His wife and children later followed him to China in 2016. The couple with their children now reside there and he also reported that his family has now adopted well but they take the help of translator due to the language difference.