Gerry Bohanon is a rising American college football player. He is currently playing for Baylor Universities in the Big 12 Conference. Gerry is now in his junior year and plays as a quarterback for his team. Bohanon was named into the All-Rookie Big 12 Academic.

Gerry Bohanon was born in the late 1990s in Earle, Arkansas. He has yet to share a word about his birth date with the public. Gerry is the son of Juanita Bihanon and her husband, Gerry Bohanon Sr. Much about his early life and parents is under the radar. After graduating from Earle High School, Bohanon enrolled at Baylor University. Gerry stands six feet and three inches tall and weighs 100 kg.

Gerry started playing American football along with his father in their backyard from his early days. He was part of his High School football team. During his High School days, Gerry represented Earle High School in numerous sports but chose to stay with football in his late days. In his sophomore year, Bohanon passed for 1,763 yards, rushed for 964 yards in eight games. 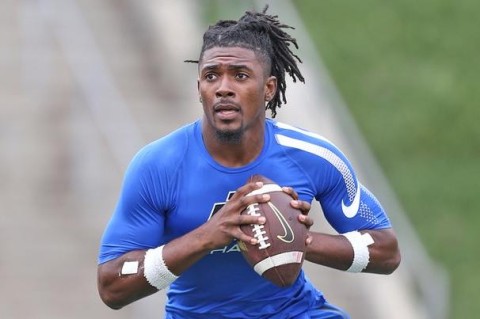 Gerry threw for 2,734 yards and rushed for more than 1,000 as a junior, and the following year, He passed for 2,675 yards with 34 touchdowns. Bohanon finished his High School career, passing for 11,362 yards and 142 touchdowns. At the end of his High School, Gerry ranked at No.1 player in Arkansas with a Four-star rating by ESPN and No.8 dual-threat quarterback.

The Arkansas-native player chose to represent Baylor University over Arkansas, Alabama, Louisville, LSU, Georgia, and Auburn. Bohanon appeared in just three games in his freshman year and made it to the Big 12 Academic All-Rookie Selection. Gerry finished his freshman year,  17-of-36 for 187 yards with 2 TD passes, and rushed 42 times for 272 yards and 3 TDs.

For his sophomore year, Bohanon remained as a backup player for the team, played in just two games, and did not play the season's final seven games. The junior season will start, and he is looking forward to making it into the regular team.

Gerry is very much private about his life events. He has not shared a word regarding his love life. Bohanon could be single, dating, or even engaged. Until The player shares his relationship status, it will remain a mystery to most of his fans. Gerry must be focusing on his career rather than spending time with people.

Gerry has yet to start his professional career. He will be listing his name in the upcoming 2022 NFL Draft or 2023 after graduating from the University. Bohanon is among the top players in the league. Many big franchises must be keeping a close eye on him. The average salary of an NFL rookie player is more than $600,000 and for the first-round pick is more than $20 Million.