Josiah Scott is a rising American football player. He has played in the National Football League for the Philadelphia Eagles. Jacksonville Jaguars drafted him in the fourth round, overall 137th pick. Scott plays as a cornerback for his team. He was selected into the Second-team All-Big Ten in 2019.

Josiah Scott was born on April 5, 1999, in Hamilton, Ohio. He is among the four children born to Oliver Scott and his wife, Danielle Scott. Both of his parents played football at Fairfield High School. Josiah graduated from Fairfield High School and then enrolled at Michigan State University. Scott stands five feet and nine inches tall and weighs 84 kg.

Josiah started playing American football along with his siblings from a very early age. He was part of his High School football team. After graduating from High School, Scott received numerous scholarship offers from Iowa, West Virginia, Miami of Ohio, Michigan State University, and shoes to remain with Michigan State. In his freshman year, Scott played in twelve games out of thirteen games the Spartans played and was named to ESPN's Freshman All-America team.

Scott remained out for eight games from a form meniscus and an injury sustained in a non-contact incident. For the junior year, Joshiah played in all thirteen games and was named defensive MVP of the 2018 Redbox Bowl after registering three tackles and four pass breakups. In early 2020, He listed his name for the 2020 NFL draft and Brandon Aiyuk and Chase Young. Jacksonville Jaguars drafted him in the fourth round, overall 137th pick in the draft.

Josiah played for the Jaguars in the 2020 NBA. In May 2021, Jaguars exchanged him to the Philadelphia Eagles for Jameson Houston.

Who is Josiah Scott Dating? Know About His Girlfriend and Relationship Status

Josiah is an active social media user. He keeps sharing most of his events and photos in his Instagram timeline. Following his posts, We can be sure that Scott is involved in a romantic relationship with his longtime girlfriend, Melissa Claudia. The love birds have been together for more than three years. 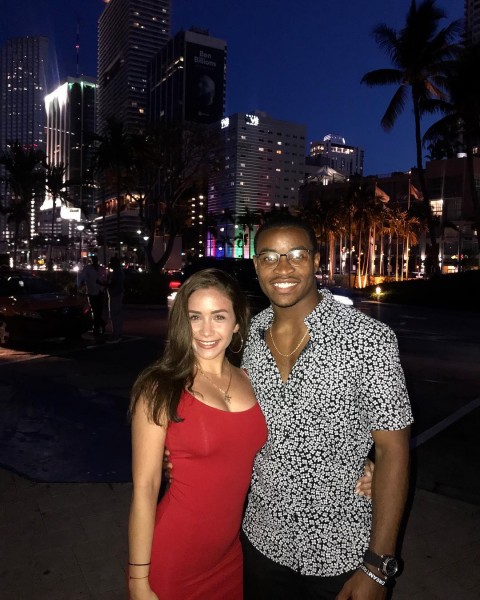 Josiah, along with his girlfriend, Melissa SOURCE: [email protected]

Scott and Melissa first met each other at the Michigan State University. The love birds are active social media users and keep sharing each other's photos regularly. They are yet to tie their wedding knot or get engaged. Claudia is very supportive of her boyfriend and keeps attending his games regularly.

Josiah Scott's Salary and Net Worth

Scott is very much early in his career. However, he shall be making millions in the days to come. Also, A football players will be making a handsome amount through their sponsorships and advertising deals.