Former No. 1 Tennis Player Garbine Muguruza has been playing professional tennis for more than eight years. Garbine turned professional in March 2012. She has won eight singles titles, including two majors at the 2016 French Open and the 2017 Wimbledon Championships. Muguruza reached the No.1 ranking in October 2017 and ranks at 13 in early 2021.

Garbine Muguruza was born on October 8, 1993, in Caracas, Venezuela. She was born to Scarlet Blanco and her husband, Jose Antonio Muguruza. Her mother is of Venezuelan descent, and her father is of Spanish descent. Muguruza has two brothers named Asier and Igor Muguruza.  She has dual Spanish-Venezuelan nationality. Garbine's family moved to Spain when she was six years old and started her training. Talking about her physical appearance, Garbine stands six feet and weighs 73 kgs.

Garbine Muguruza has an estimated net worth of more than $20 Million. Garbine ranks at No. 13 in the all-time money list in WTA. Last year, She was ranked among the Top 10 Highest-Paid Female Athletes when she took home more than $6.6 Million as her earnings, of which $4.5 Million came through her wide range of endorsements.  The tennis player must be earning millions from her sponsorships and advertising deals. 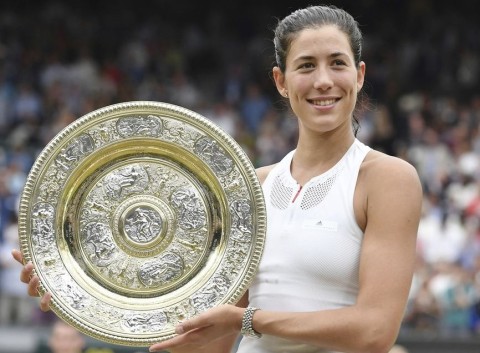 Muguruza currently enjoys sponsorship deals with Beats, Adidas, Babolat, Rolex, Maui Jim, and Cesar Insurance. Her apparels deal with Adidas is considered to be one of the most lucrative ones in tennis. Totaling her income from tennis, it sums to $21,159,801. Garbine is very much at the peak of her career. She shall be earning much more in the days to come.

Garbine is very much private about her personal life. She is yet to utter a single word about her relationship. Some have hinted that She is lesbian but is not confirmed by any sources. However, In early 2020, Rumors spread of Garbine dating Swiss professional tennis player Stan Wawrinka as both of them were spotted training together numerous times.

Nobody shared a word about the incident, and the rumor slowly faded away. Muguruza is an active social media user. She keeps posting photos of her training and her tours around the world. Garbine seems single as of early 2021 and living a happy life on her own.

The Spanish-Venezuelan professional tennis player turned professional in March 2012 and made her debut at the Miami Open. She played her first US Open the same year but lost in the starting round. The following year, Garbine qualified for 2012 Australian Open but lost the opening match against Serena Williams. She ended that year as the world No. 63 in singles and No. 153 in doubles.

In 2014, Garbine won her first WTA title at Hobart International. She entered in top-30 at the end of the 2014 season. In the following season, Muguruza won both of her singles rubbers in the 2015 Fed Cup World Group II. She reached her first Grand Slam title final in the 2015 Wimbledon Championship and lost to Serena Williams. Muguruza entered the top 10 for the first time, moving up to world No. 9 in the rankings.

In 2016, The Tennis player won the French Open against Serena Williams. With the title, she rose to a career-high No. 2 in the WTA rankings of 6 June 2016. In 2017, She had many ups and downs in their ranking. At the end of the season, Garbine defeated Venus Williams and won her first Wimbledon title. Muguruza reached No.1 Ranking but lost the title shortly.

In the following years, Garbine could not make it to the top of her game and had many ups and downs. In 2020, She reached her first Australian Open but lost at the end to Danielle Collins. In early 2021, She had made an excellent comeback to her career, won Dubai Title, and made it to Doha Final, Melbourne.