Franco Nicolas Escobar simply known as Franco Escobar is an Argentine professional footballer who is currently signed to the Major League Soccer (MLS) side Atlanta United FC. The defender is a professional since 2015 who had previously played for the team Newell's Old Boys until 2017.

Rosario, Santa Fe, Argentina native, Franco Escobar was born on 21st February 1995, under the star sign Pisces. The twenty-five years old holds an Argentine nationality but his ethnicity is unknown.

How Much Is Franco Escobar's Net Worth As Of 2020?

It's been five years since Escobar has made his debut as the professional footballer. Surely, he has summoned a considerable sum of money through his career. As of 2020, his net worth is approximately $0.5 million. His salary for the 2020 season is $300,000 from Atlanta United. In the club, Josef Martinez and Ezequiel Barco are the highest-paid athletes.

Besides, there is no information regarding his endorsement deals and his other source of income.

Once much surrounded by the news of love and girlfriend, Franco Escobar now has maintained a low key personal life. Earlier, he is often spotted with his girlfriend on various public places and events. Also, his IG story and post showed they are in much love. But lately, he deleted all his posts with his girlfriend. 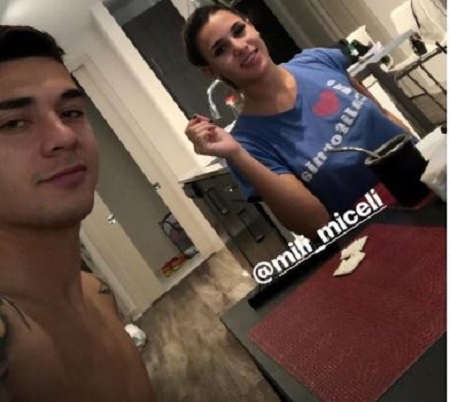 Have they broken up? Escobar has not disclosed any information about break up but not also how their relationship is going on.

Franco Escobar was born to Argentine parents and raised in his hometown Rosario, Santa Fe. The detailed information regarding his father, mother, and siblings is yet to come oout in the media.

After playing with Newell's Old Boys' youth system, Franco was called up to the senior team in 2015. That year on 7th June, he made his professional debut against Boca Junior. Overall, he played three seasons for the team, appearing in 34 games with no goal.

On 8th December 2018, he signed to the MLS side Atlanta United FC. Moreover, he scored two goals for his club in the 2018 MLS Cup Playoffs, including the second goal in the cup final.