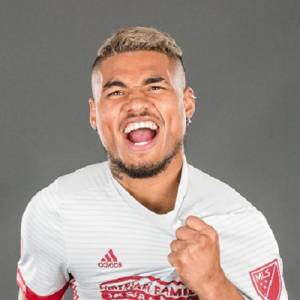 Josef Martínez is a very popular name in American soccer world and Major League Soccer (MLS). He is a Venezuelan football player who is currently signed to the MLS club Atlanta United FC and plays as a striker. He started playing football professionally in 2010 with the Venezuelan club Caracas.

How much does Josef earn from the MLS club? Is he Married? Check the bio to know everything about him.

Josef Martínez is currently signed to Atlanta United FC since 2017. He is under a 5 years contract with the MLS club and is the highest-paid player of the team with a $3 million base salary, with $3.06 million in total guaranteed compensation.

The Venezuelan forward was the key player during Atlanta's 2018 title-winning campaign which saw him get the salary rise by a huge margin. He was honored with the All-Star, regular season, and MLS Cup MVP honors in 2018 which was the reason Atlanta agreed to increase his paycheck by $136 percent from his earlier salary which was $1.27 million. Ezequiel Barco is the second best-paid player with the salary of $1.42 million.

Who is Josef Martínez's Wife?

The 27-year-old footballer is reportedly unmarried and doesn't have a wife. He has not disclosed much details about his relationship and personal life. He could be dating his girlfriend secretly but he has always remained silent on this matter.

Martinez has an athletic body and his height is around 5 feet and 8 inches. He has Blonde hair and black eyes.

Matinez was born as Josef Alexander Martínez Mencia on 19 May 1993, in Valencia, Carabobo, Venezuela. He also has a sister and was raised by his grandparents with a cousin while his parents were busy in their works. His grandfather was a bricklayer while the family also owned a shop. He holds a Venezuelan nationality and his star sign is Tauras.

Josef started training soccer at the age of nine with Centro Italo, a soccer program. He later joined the youth team of Caracas and played until 2010.

The Atlanta forward started his professional career with Caracas in 2010. After playing for two years, he joined Young Boys and played for a season. He was loaned to Thun for the next season and then moved to Serie A club Torino in 2014 where he remained for 3 seasons.

Josef was loaned to Atlanta in 2017 but was later signed permanently. Moreover, he also a member of the national team since 2011.

Josef was loaned to Atlanta in 2017 but was later signed permanently. Moreover, he also a member of the national team since 2011.