Filip Hrgovic is a Croatian professional boxer who is known for winning a gold medal at the 2015 European Amateur Boxing Championship as well as bronze at the 2016 Summer Olympics. He holds an amateur record of 74 victories and 15 losses. Currently, he is ranked as the world's 10th best active heavyweight.

Heavyweight Filip Hrgovic, one of the best prospects in boxing, is signed to Sauerland Promotions. A year ago, promoter Team Sauerland started working with Matchroom Boxing, DAZN, and Sky Sports to deliver him big fights with a big cheque.

The U.S. Bureau of Labor Statistics reports that professional athletes -- a category that includes professional boxers -- have an average salary of $75,760. However, the purses for highly accomplished fighter earn $60,000 to $375,000 for the title fight only.

Boxers may also receive additional income from sponsors. Some companies may pay boxers in exchange for endorsing a product or wearing a company logo during a fight. 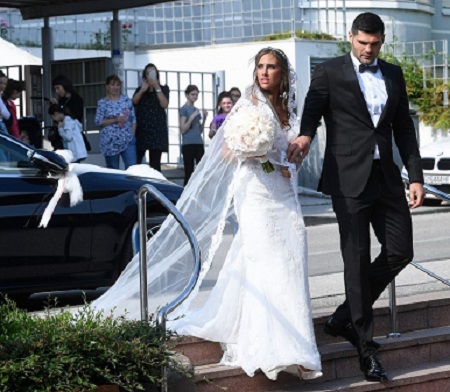 The bride looked elegant in her white wedding gown carrying a bouquet of white roses, whilst Filip looked sharp in a bow tie. “Mr & Mrs. Hrgović forever,” Filip wrote under a photo he posted on social media of the couple on their big day.

The couple both grew up in Sesvete and have known each other for a long time. Marinela is also into sports and is a keen volleyball player. Filip and Wifey, Marinela, who is two years younger than him, have been dating since 2013. The pair got engaged in 2018.

Filip is the son of Petar and Iva Hrgović. His father hails from Livno, Bosnia and Herzegovina who works for Croatian Motorways, while his mom, was born in the Croatian capital Zagreb is a graduate in kinesiology and was focused on raising Filip and his four other siblings.

Being overweight as a child, Filip. later he took up swimming, which would also last only a short period of time. At the age of 13, he started boxing. Though his mother wasn't overly happy with Filip's decision to take up boxing as a profession, his mind was already made up.

On 30 September 2017, Hrgovic made his professional boxing career debut with a first-round stoppage win against Raphael Zumbano of Brazil. Soon after that, he inked a deal with Sauerland Promotions. The following year. he was shortlisted for The Ring magazine Prospect of the Year award after he won all five of his matches in 2018.

Notably, he won against Amir Mansour and Kevin Johnson. He 2019, he had three fights compiling all wins. On 26th December 2020, Filip faced Alexandre Kartozia. He won the fight via KO in round 2.