Fernando Gorriaran is a well-known Uruguayan professional football player. He is currently playing at the Mexican football league, Liga MX, for Santos Laguna. Fernando turned professional in 2013 with River Plate Montevideo in his home country. Gorriaran plays as a midfielder for his club and country.

Fernando Gorriaran was born Fernando Gorriaran Fontes on November 27, 1994, in Montevidoe, Uruguay. He is yet to share about his early life and parents in public. Gorriaran completed his primary education and continued his football career. Regarding his physical appearance, Fernando stands five feet and six inches tall and weighs 65 kg.

Know About Fernando Gorriaran's Net Worth, Salary and Earnings

Fernando Gorriaran has an estimated net worth of more than $1 Million. He credits most of his net worth to his football career. Gorriaran has been playing at the professional level for almost a decade. As per sources, Fernando receives an annual salary of £379,600 while playing with Laguna for the 2022 season. Fernando shares a photo of his vacation SOURCE: [email protected]

Last season, Gorriaran had a similar salary as of his 2022 season. He is very early in his career and will be making millions in the future. Gorriaran joined Santos in 2019 and is among the highest-paid player for the club.

Who is Fernando Gorriaran Dating? Know About His  Relationship Status and Girlfriend

Fernando is an active social media user. He keeps sharing his personal life photos and information on his social media. The football player is dating his longtime girlfriend, Mily Lopez. The love birds have been together for more than a year. 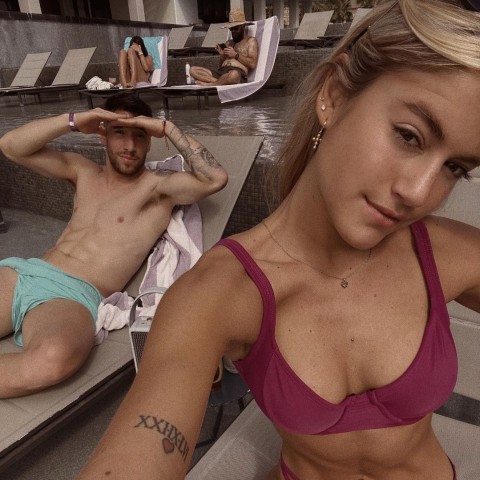 Gorriaran posted a photo of them in February 2021 for the first time. Both of them are very much supportive of each other. They keep going on holiday vacations in their free time. The duo is yet to get engaged or tie their wedding knot.

Fernando started playing football with his local youth team of River Plate Montevideo. He trained with the club and represented the club in numerous divisions. Gorriaran earned his senior team call in 2013 but waited for sometime before making his professional debut in February 2014 against Penarol. The player signed his first major contract until the 2016 season.

In the next three seasons, Gorriaran appeared in eighty-six matches and scored six goals for the club. He did not extend his contract and then moved to Nemzeti Bajnoksag I in Hungary and signed a four-year contract. He was a regular player with the club but did not finish his contract with the club and moved to Mexico in 2019 and signed a long-term deal. In his two seasons with Ferencavraros, Fernando appeared in fifty-two games and scored four goals. The team won the league title in the 2018/19 season.

Fernando has appeared in ninety-three games until early 2022. He has scored twelve goals for the club. He was named into the Liga MX Best Xi team and All-Star in the 2021 season.

Do Follow:Mauro Arambarri and Gaston Pereiro