Felix Arvid Ulf Kjellberg widely recognized online as PewDiePie is a Swedish YouTuber, comedian, and Philanthropist. Popular for his Let's Play videos as well as comedic formatted shows, his YouTube channel has 106 million subscribers and has 25 billion views as of July 2020.

How Much Is Felix Kjellberg Net Worth In 2020?

As of 2020, PewDiePie’s net worth is estimated to be $40 million. In a video released on March 29, 2019, he revealed he makes around $3,400 (£2,606) an hour. Forbes named PewDiePie as the highest-earning YouTuber. His YouTube earning over the year is disclosed in the table below:

Total it all up and PewDiePie has made more than $73 million pre-tax off his YouTube empire since 2013.

Besides, he is involved with many other productions and projects. Also, he is a big giver and has a project called the ‘Water Campaign,’ through which he managed to raise over $400,000 and has also been involved with many collaborations over the years.

PewDiePie's Wife: Is He Married?

Kjellberg married his long-time Italian girlfriend Marzia Bisognin, an Internet personality, fashion designer, and businesswoman who is popular for her videos on her now-inactive YouTube channel. The duo was introduced through a Bisognin's friend in 2011. After started dating online, they shuffled between Sweden and Italy before finally setting in Brighton and Hove, England. 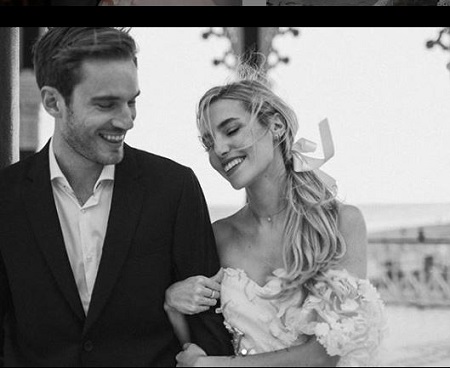 On 19th August 2019, the couple tied the knot in a stunning ceremony in London. Currently, resides in Brighton, England, they also have a home in Japan.

PewDiePie is the son of Lotta Kristine Johanna, a former Chief information officer (CIO) who was named the 2010 CIO of the Year in Sweden and Ulf Christian Kjellberg, a corporate executive. He has a sister, Fanny.

Growing up, Kjellberg was interested in art, drawing popular video game characters such as Mario and Sonic the Hedgehog, as well as play video games on his Super Nintendo Entertainment System. He used to skip classes to play video games at an Internet café with friends during high school. Upon graduation, he attended the Chalmers University of Technology but dropped soon to focus on his YouTube career.

On December 19, 2006, Felix joined YouTube and was actually called "Pewdie". His early videos consisted of Felix playing Call of Duty, mixing some vlogging videos. On April 29, 2010, he created a new channel, PewDiePie after he forgot/lost the password to his Pewdie channel. On his 2nd channel, he focused on Call of Duty, Minecraft, and various other horror/action games. 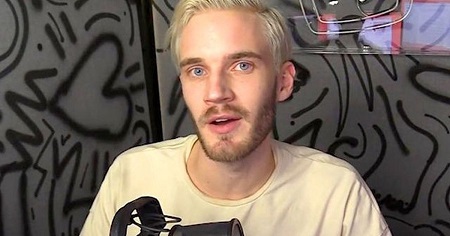 On 15th August 2013, he became the most subscribed YouTuber and after shortly surpassed in late 2013 by YouTube Spotlight, firmly held the title until early 2019, when he publicly vied for it with Indian record label T-Series. Now, his channel is the 2nd-most-subscribed on the platform. In 2016, Time magazine named him one of the world's 100 most influential people.