Fortnite Battle Royale star streamer Tyler Blevins prior to retiring from the streaming platform Twitch was the most subscribed twitcher with over 14 million subscribers. He is hugely famous in the internet gaming and gameplay community as Ninja.

He has been a controversial gamer on twitch but was loved by many before he decided to drop the streaming platform, so let's take a look at his net worth, career highlights, and controversial statement over another twitch gamer IcyFive, here!

Tyler Blevins AKA Ninja had over 14 million subscribers in his Twitch channel, and as per the streaming service, a subscribe in twitch costs a user around $6, and one half of it is taken by the streaming service, whereas other half is paid to the gamer. Meaning, he definitely made over $4.2 million from Twitch in his five years long twitch career.

Likewise, he now has around 24 million subscribers in his official YouTube channel and his videos are well received. Hence he makes a healthy amount of money from his YouTube channel as well. As per CNBC Ninja makes around $500 thousand per month from his youtube video ads. Likewise, he also sells merch and often advertises his sponsors online, which further add to his net worth. So, as of 2020, Tyler Blevins is worth around $15 million.

In December 2018, Ninja claimed to earn over US$10 million in 2018. Then, Reuters announced that Blevins had been paid US$1 million by Electronic Arts to promote Apex Legends, a competing Royal Combat game for Fortnite.

On August 1, 2019, Blevins left Twitch to switch to Microsoft's Mixer app. As per his wife-manager Jessica the deal with Twitch restricted Ninja to expand his brand outside of online gaming, and for that kind of Twitch culture, "it just seemed like he was losing himself and his love of streaming."

Tyler is equally generous when it comes to giving back as well. He hasn't only helped raise money for any event, but he is also known for giving money out of his win purse to different organizations as well.

In charitable fundraising stream, held in February 2018, Blevins raised over $110,000 to be donated to the American Suicide Prevention Foundation.

At the first Fortnite Battle Royale Esports event in April 2018, Blevins gave away almost $50,000 from his prize money, of which $2,500 went to the Alzheimer's Association.

He also participated in #Clips4Kids fundraiser with fellow streamers DrLupo and TimTheTatman, and raised over $340,000. In E3 2018, Blevins and Marshmello dominated the Fortnite Pro-Am series, which resulted in the donation of a $1 million bonus to the charity of their choosing. 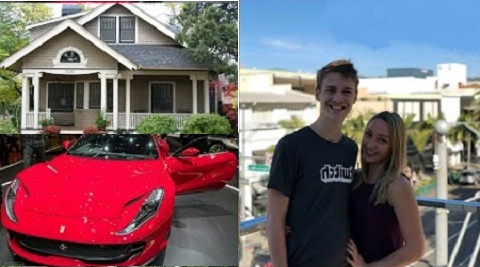 Ninja is equally into fast cars and new gadgets but hasn't upgraded his house, as he still lives in his Chicago based home with his wife.

(Richard) Tyler Blevins AKA Ninja was born on June 5, 1991, to Welsh-American parents in Detroit, but his family moved to Chicago when he was pretty young. Growing up, he attended Grayslake Central High School and played for the school's soccer team.

After graduation, he decided to play video games fulltime, entering tournaments, joining professional organizations, and live streaming his games. Then he joined YouTube in 2009, playing Halo 3 with gaming crews such as Cloud9, Renegades, Team Liquid, and Luminosity Gaming.

By 2011, Blevins became a streamer. He started playing H1Z1, then switched to PlayerUnknown's Battlegrounds. He initially joined Luminosity Gaming in 2017 as a Halo player, then transferred to H1Z1, then shifted to PUBG, where he won the PUBG Gamescom Invitational Squads in August 2017.

Blevins streamed a newly launched Fortnite Battle Royale shortly after the PUBG Gamescom open tournament. His viewership began to grow, which happened to coincide with the increase in popularity of the game over the late 2017 / early 2018 period. His followers on Twitch had grown from 500,000 in September 2017 to more than 2 million by March 2018.

In March 2018, Blevins played Fortnite with Drake, Travis Scott, and Juju Smith-Schuster and broke the Twitch record for the largest live audience on an individual stream and had over 635,000 viewers while he was playing the game. Blevins then partnered with Red Bull Esports in June 2018 in a Fortnite event, "Red Bull Rise Till Dawn in Chicago" on July 21, 2018, where players could challenge him.

So far, he also has appeared in The Ellen's show, Family Feud, and also has been featured in ESPN Magazine.

In one of his twitch streams, he said that he doesn't stream with female streamers out of respect for his wife. This statement received a huge backlash and he was bashed for not giving women gamers a platform. Then in one of his streams, he sang Logic's "44 More", changing the N-word to something else which also raised several eyebrows.

Once he reported gamer IcyFive for sniping and left the game before he could report him, later when IcyFive uploaded the video he wasn't doing anything Ninja claimed, the feed ended after Ninja apologized for his actions.

Jessica Goch popularly known as Jess Blevins is Tyler Blevins' longterm lover turned wife who also manages team Ninja. As per an interview published in Businessinsider, the pair met back in 2010, while Jessica was a freshman at the University of Wisconsin-Whitewater, her then-boyfriend invited her to attend a "Halo" tournament called Focus Fire where she first met her future husband.

After knowing each other and dating for over 5 years, the pair finally got married in August of 2017 and now she also manages Tyler's career.