Minecraft gamer and game commentator Daniel Middleton welcomed his son Asher Middleton, born on 5 January 2020. Daniel gave his fans a reason to smile in the pandemic hit year. So, let's get all details about 2017's Forbes highest-paid YouTuber Daniel Middleton's personal life, net worth, and other physical stats, here.

As mentioned above, he is now a father of a lovely boy Asher with his longterm girlfriend turned wife Jemma. So, Let's start with the net worth:

As per Forbes magazine, Dan earned $16.5 million/£12.2 million in 2017 from his YouTube channel making him the highest-paid YouTubers of 2017. Likewise, as per CNBC.com, in 2019 he is still the world's seventh highest-earning game-streamer. Behind Dude Perfect, Anastasia Radzinskaya, Rhett & Link, Jeffree Star, and PewDiePie. In 2019, he shared the 7th spot with Markiplier $13 million.

So far, with his YouTube success, along with his TV and movie appearance and from the royalty he earned as a writer, Daniel Middleton has been able to accumulate around $35 million in net worth. Moreover, he also earns from his merch sales and brand promotion.

Married Life and Arrival of a Baby in 2020

Up until June 2013, no one knew how DanTDM actually looked like but he finally showed his face after his channel exceeded 100,000 subscribers. 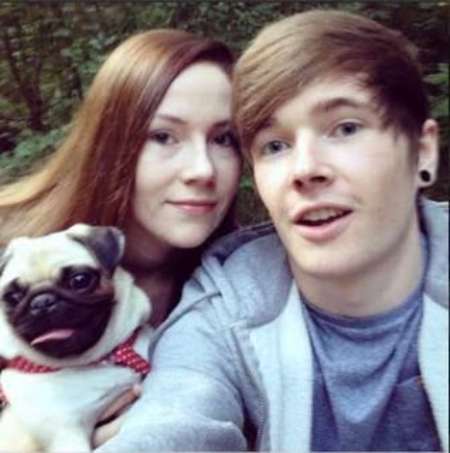 CAPTION: Daniel Middleton with his wife and pug SOURCE: Playerswiki

Then he revealed his longtime girlfriend Jemma to his fans and two months after revealing about his girlfriend, Middleton married his girlfriend Jemma on 17 March 2013. The pair suddenly surprised all their fans with the delivery of their baby boy Asher, born on 5 January 2020, after 6 years of their marriage. So far, the pair hasn't revealed their new-born infant's face due to privacy concerns.

Daniel Middleton, famous as DanTDM was born on 8 November 1991 in Aldershot, England. He is the eldest of two children of his parents. Sadly, his parents divorced when he was a child. Not much has been known about his life growing up, but as we can guess he should be interested in computer games from his early days.

As an undergraduate student, he attended the University of Nottingham. During his college days, he started a YouTube channel, back in 2009 and played Counter-Strike as PokemanDanlvl45.

In 2012, Middleton ran The Diamond Minecart, a gaming site. Later, he changed the name of his channel to TheDiamondMinecart/DanTDM, and then to DanTDM on 12 December 2016 and up until this day, he makes videos from his home studio in Wellingborough.

On 6 October 2016, he wrote a graphic novel entitled Trayaurus and Enchanted Crystal. The novel stayed number one on the New York Times Best Seller list of hardcover graphic books for eleven weeks. He was a guest at the Cheltenham Literary Festival and went on a book tour that included parts of the UK and a visit to New York City. In 2017, he embarked on a tour of the United States and Australia. Likewise, in 2017 DanTDM appeared in a 6 episode web series A Big Scene as himself.