Facundo Bagnis is a well-known Argentine professional tennis player. He is currently playing at the professional level for more than twelve years. Bagnis turned professional in 2007. Facundo is the gold medal winner in the 2014 South American Games in both Singles ad Doubles. Bagnis represented his nation in the ongoing 2020 Tokyo Olympics and lost his first game to Dominik Koepfer in the First Round.

Facundo Bagnis was born on February 27, 1990, in Rosario, Santa Fe. He is yet to share a word about his parents and his early life in public. His parents remain the biggest supporter of his games to date. Bagnis stands exactly six feet and weighs 82 kg.

Facundo Bagnis has an estimated net worth of more than $1.5 Million. A tennis player earns prize money as her the round they reach in an event. No player has to return empty-handed competing in an event. Facundo must be making a handsome amount through his sponsorship and advertising deals. Bagnis has earned most of his net worth through his APT Tour events. 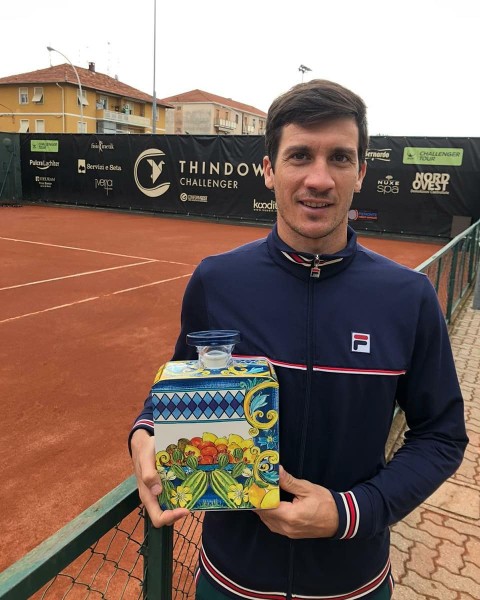 Who is Facundo Bagnis Dating? Know About His Girlfriend and Relationship Status

Facundo is involved in a romantic relationship with his longtime girlfriend, Rocio Calvo. The love birds have been dating each other for some time. The duo has not shared a word about their first meeting instance in public. Bagnis first posted his photo with Rocio in December 2020. His timeline is filled with photos of his games, training, and trips with his friends and family.

Facundo started playing tennis from a very early age. He won his first title at the Bolivia F3 under challenger and Futures Finals in 2008. Bagnis has won fourteen ATP Challenger Tour titles and five ITF Futures Tour. He is yet to register his major grand slam title.

Facundo represented Argentine in the 2014 South American Games and won a gold medal for singles and doubles. The following year, He participated in Pan American Games and won the gold medal in Men's singles and silver in doubles. The player reached First Round in the 2021 Wimbledon. In the delayed 2020 Tokyo Olympics, Bagnis got eliminated in round one by Dominik Koepfer.