Etebo Oghenekaro is a professional football player who plays as a midfielder for the Nigerian National football team and for Championship League side Stoke City F.C.  Besides he also has represented Nigeria in the under 23 levels and helped his country, Nigeria to win U-23 Africa Cups of Nations.

Oghenerako was the part of the Nigerian football team that won the bronze medal in the 2016 Olympics in Brazil. 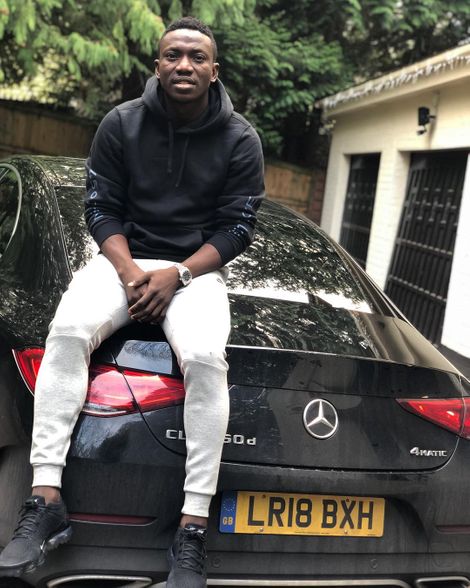 His market value is around £6.30 million.

Currently, 23, the star midfielder's relationship status is married. He tied the knot with his long-term girlfriend, Ebhota Bethel in Warri in 2018. the couple tied the knot in a traditional Nigerian style.

Familia is not how big the family is but how happy it is just want to use this opportunity to appreciate wifey for the years we have stick together..

Their wedding was held at the bride’s residence and attended by only close friends and family members.

I always have this believe that you gonna be destined for gr8tness every good things in life will never slip through your feet.. Daddy’s [email protected]

The couple, who had been dating for a long time, share two children together. The couple became the parents for the first time in the mid-2010s with the birth of their first child, a son named Wealth. Recently in November 2019, his wife gave birth to their second child.

Etebo Oghenekaro is of Nigerian nationality with an African ethnic background. He was born in Lagos, Nigeria to Nigerian parents on November 9, 1995.

He was interested in playing football from an early age and joined the Nigerian local youth clubs, Lord Honour F.C, and Warri Wolves.

After joining the junior team of Warri Wolves, he went on to make his senior debut for the Nigerian club on April 14, 2013 and announced his arrival by scoring a hattrick in the season.

He scored the fastest hattrick within 25 minutes against Wikki Tourists and his tally of 17 goals was the second-best goal scored by a rookie player in the debut Nigerian Professional Football League behind his fellow teammate Ahmed Musa and the best by the midfielder in the league.

His attacking style of play drew comparisons with greats like Frank Lampard and Michael Essien.

The attacking midfielder’s outstanding got the attention of Tunisian football clubs as Esperance and Zamalek. He was on trial with Italian Serie A club, Udinese on 2014 but due to fee dispute, he returned back to Nigeria and completed his contract term with Warri Wolves.

With the club, he was the part of a team that won the Delta State FA Cup in 2015. The Nigerian player also won CAF most promising talent of the year award in 2015 which was also won by fellow Nigerian teammate, Kelechi Iheanacho and for his goal against Bayelsa United during 2014./15 the season got him the Glo NPFL Wondergoal award in 2015.

Following his success with the Nigerian club, he signed with the Portuguese Primeira Liga team, CD Feirense on 2016 and made his debut against Oliveirense in April 2016. He scored his first goal for the team against Academia Viseu.

Oghenekaro was transferred to the Spanish La Liga club, Las Palamas as a loan from CD Feirense on January 31, 2018, for six months.

On 11 June 2018, Etebo joined the EFL Championship side Stoke City.

Etebo Oghenekaro was the best player of Nigeria as the team went on to win the U-23 Africa Cup of Nations in 2015 by scoring five goals which were the highest number of goals scored in the tournament.

He made his international debut for the Nigerian senior team against Cote d'Ivoire on 27 July 2013 in an Africa  Cup of Nations 2014 and made an important role in Nigeria to qualify for the Olympics and scored four memorable goals against Japan in the opening round match for Nigeria.

Etebo scored his first international goal against Eygpt on 25 March 2016 during the 2017 Africa Cup of Nations Qualifier and provide major assistance to Mikel John Obi in the most anticipated World Cup 2018 qualifying match against Eygpt in November 2016.

He made his World Cup debut against Croatia on 16 June and scored a own goal.