Jarret Stoll is a Canadian former professional ice hockey player who has played in the NHL for the Edmonton Oilers, Los Angeles Kings, New York Rangers and Minnesota Wild. He has won 2X Stanley Cup champion with Los Angeles in 2012 and 2014.

Net Worth and Contract

His contract are listed below:

Jarret Stoll is a married man. He married Erin Andrews, a sportscaster on June 24, 2017, in Yellowstone Club in Montana. They were in a relationship since 2012 and got engaged in December 2016. The ceremony had the attendance of some famous personalities like Joe Buck, Michael Strahan. 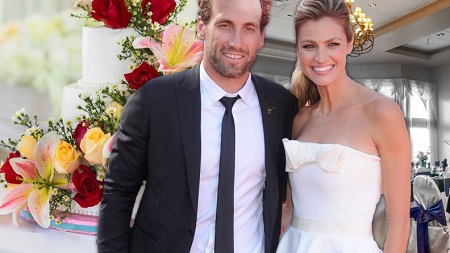 He was previously engaged to actress Rachel Hunter and also dated Wayne Gretzky's daughter, Paulina. Stoll was arrested for possession of cocaine and ecstasy at a hotel in Las Vegas in 2005.

Stoll was arrested for possession of cocaine and ecstasy at a hotel in Las Vegas in 2005.

Jarret Stoll was born on June 24, 1982, in Melville, Saskatchewan, Canada, and his parents are Tim Stoll and Sheri Stoll. He is of Canadian nationality and belongs to White American ethnicity. His Zodiac sign in Cancer.

Stoll was born to Sherri Stoll and Tim Stoll. He has two siblings named Kelly Stoll and Ashley Wilson.

Stoll started his Junior WHL career at the end of the 1997–98 season with the Ice and played his entire junior career with the Ice franchise. He made his junior debut in 2002. He was declared as the caption of his team during his third season with the club. He made his professional debut with Edmonton Oilers in the 2004-05 season. Stoll was named one of the Oilers' alternate captains for the team's road games.

Stoll later moved to Los Angeles Kings On June 29, 2008, signing a four years deal worth $14.4 million. Stoll along with his team won their first Stanley Cup with the Los Angeles Kings, their first championship in the history of the franchise against the New Jersey Devils.

After a successful season with the club, he further signed as a free agent to a one-year contract with the New York Rangers On August 10, 2015. Stoll made his debut with the Rangers as the team's fourth-line center on the opening night of the 2015–16 season, in a 3-2 victory over the Chicago Blackhawks on October 7, 2015. Playing 29 games with the club and contributing with just 1 goal and 3 points, Stoll was waived by the Rangers due to his bad performances.

On December 15, 2015, he signed with the Minnesota Wild. He didn't officially announce his retirement but he ended up his hockey career after accepting a job as a talent scout for the Kings on December 15, 2016.