Emily Engstler is an American professional basketball player. She played for Syracuse before joining the University of Louisville after her junior season in 2021.  She played high school basketball at Saint Francis Preparatory School, earning MVP her junior and senior years.

New York City native, Emily Engstler was born in 2000. She holds an American nationality and is of white ethnic background. She stands 6-1 tall. Emily is the daughter of Marilyn and William Engstler. She has one brother and a sister. About her academics, she majored in communications and rhetorical studies in the College of Visual and Performing Arts.

Emily Engstler enrolled at Saint Francis Preparatory and joined the college basketball team. In her two years at St.Francis Prep, she scored 900 points. As a junior, she averaged 19.4 points, 15.4 rebounds, and six blocks per game. She won the 2018 New York State Gatorade Player of the Year.

A five-star recruit, Emily Engstler was ranked No. 9 player in the Class of 2018 by espnW HoopGurlz.

For a collegiate career, Emily Engstler joined Syracuse University. She was named to the ACC Preseason Newcomer List. As a freshman season, she averaged 4.9 points per game and 4.5 rebounds per game.

The following season, she recorded career-high 17 rebounds and had 13 points against Michigan State.

During his junior season, he averaged a double-double with 10.5 points and 9.1 rebounds per game. He was named ACC Co-Sixth Player of the Year.

For the senior season, Emily transferred to the University of Louisville. She was named to Cheryl Miller Award Watch List.

How Much Is Emily Engstler Net Worth In 2022?

Aforementioned, Emily is currently in her senior year at the University of Lousiville. Not to mention, NCAA does allow colleges to pay their athletes. However, they have introduced a new rule which had made college athletes to make money from endorsement, Sponsorship, and socials.

In 2021, she played with the USA 3x3 women's team at the FIBA 3x3 U23 Nations League in Voiron, France. Though the national athlete does not have a fixed salary, they will get compensation, for representing the national team.

There is no report of Emily Engstler's love life in the media. Scrolling through her social media profiles, the forward seems interested in a boyish get-up. Also, she has not been spotted by anyone to date which makes her love life a mysterious topic. 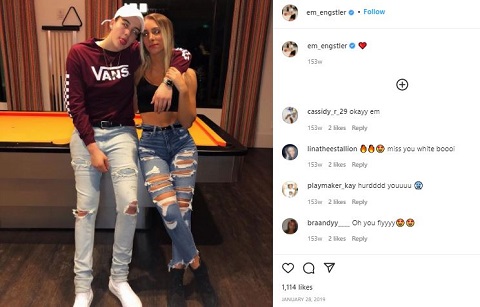 On 28th January 2019, Emily shared a cozy picture with her Syracuse University mate, Marisa Fish on Instagram. Her followers speculated Marisa as her girlfriend. Later, Marisa re-poted the picture with the caption BESTFRIEND which clears there is nothing romantic.