Elijah Moore is a rising American football player. Elijah came to the spotlight after making it into the NFL. New York Jets drafted Elijah in the 2021 NFL draft in the second round. He will be playing in the league with first-round picks Zach Wilson (QB) and Alijah Vera-Tucker (OL) to form a revamped offense.

Elijah Moore was born on March 27, 2000, in Sunrise, Florida. He is the son of Sean Moore and his wife, Elisa Moore. Elijah holds American nationality and is of African-American descent. Moore graduated from St. Thomas Aquinas High School and then enrolled at the University of Mississippi to major in Sport and recreation administration. Elijah stands five feet and nine inches tall and weighs 84 kgs( 185 lb).

Elijah played numerous sports in his High School days. He shifted his focus to football at the end of High School and caught 28 passes for 407 yards and five touchdowns, and was named an Under Armour All-American in senior year. He was rated a four-star recruit. Moore listed among thirty-three scholarship offers and initially committed to play for the University of Georgia but later changed to the University of Mississippi.

Elijah appeared in every game as a true freshman. He caught 36 passes for 398 yards and two touchdowns. Earned the first-team consensus. As a sophomore, He led the Rebels with 67 receptions, 850 receiving yards, and six touchdown catches. Moore was named third-team All-SEC by Athlon. In the junior year, Elijah earned the first-team consensus All-American allocates. Moore finished the season with a school record of 86 receptions for 1,193 yards and eight touchdowns. He played in and started eight games at wide receiver before elected to forgo the remaining games to prepare for the 2021 NFL draft.

How Rich is Elijah Moore? Know about His Earnings and Net Worth

Elijah played in the NCAA representing Ole Miss. As per the rules, Universities are not allowed to pay their players to play for their team. Most of the universities provide athletes with scholarships to cover their expenses. 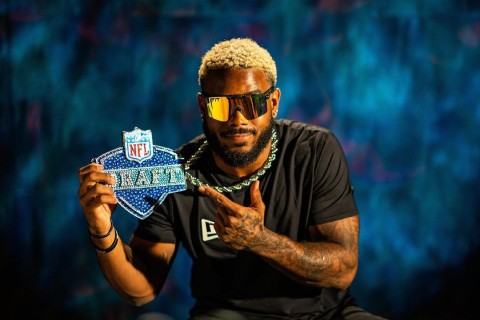 Elijah is about to start his professional career. He will be landing a huge contract with the Jets shortly. The average salary of an NFL rookie player drafted in the second round is more than $3.5 Million. Also, an American football player will be making a huge amount through their sponsorship and endorsement deals.

Elijah is an active social media user, and his timeline is filled with photos of his games and his training. Moore seems to the single as of mid-2021. The player is very much early in his career and must be focusing on his career rather than spending time with people.