Zachary Wilson is an American college football quarterback who is playing for Brigham Young University (BYU) in the NCAA division. He finished his high school career at Corner Canyon.

Draper, Utah native, Zach Wilson was born on 3rd August 1999, under the star sign Leo. The twenty-one years old holds an American nationality and is of white ethnic background. Regarding his physique, he stands 6 ft 3 in (1.91 m) tall and weighs 210 lb (95 kg).

Do Zach Wilson Gets Paid From College?

The top division I NCAA football teams generate well over $100 million in revenue per season. Surprisingly, though, the athletes that make college sports possible aren’t paid. Sure, players are often given full scholarships, to cover their college tuition and costs. It is against NCAA rules to receive compensation for playing a sport.

The ultimate goal of every athlete to get a draft into the NFL. The average NFL salary was only about $2.7 million. If Zach gets drafted by the NFL team in the future, he will earn a million in salary. But as of now, he does not get paid by his college team and his net worth is under review.

Wilson enrolled at Corner Canyon Hih School where he passed for 2,986 yards and 24 touchdowns and also rushed for 752 yards and eight touchdowns as a senior.

Upon graduation, he attended Brigham Young University. During his freshman year, he played in nine games and made seven starts. He started his career first game against Hawai. He concluded the season, completing 120 of 182 passes for 1,578 yards with 12 touchdowns and three interceptions.

That season, he was named the MVP of the 2018 Famous Idaho Potato Bowl following all 18 of his passes for 317 yards and four touchdowns.

During the sophomore season, Zach started nine games, completing 199 of 319 passes for 2,382, 11 touchdowns, and nine interceptions. In 2020, he returned as BYU's starter his junior year.

Zach Wilson comes from a family of highly successful, driven people on his mother’s side and a dedicated father who compensated for the shortcomings of his own childhood. His maternal grandparents: Gary and Rose Neeleman are lawyers, doctors, international bureau chiefs, entrepreneurs, evolutionary businessmen in the airline and medical industries.

Zach Wilson Affair; Who is his Girlfriend

Wilson's love is kinda a open secret. He often shares pictures with his girlfriend but there is no tag to her, so, the name is secret. However, on one of his birthday post to her, he mentioned Abigail. So her name must be Abigail. There are only a few pictures of them on Wilson's IG. Besides, there is no information about their love affair. 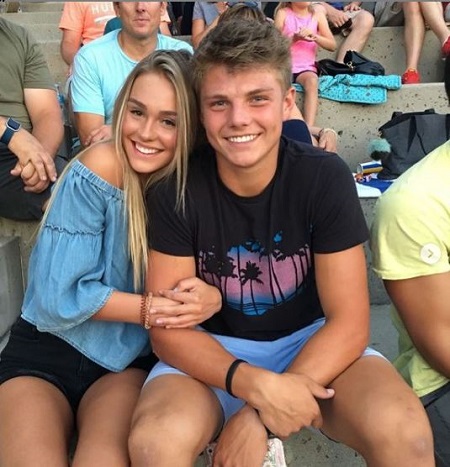 However, scrolling through Wilson's IG page, he first posted a picture with Abigail in 2017. So, the duo is dating since.