Alijah Vera-Tucker is a rising American football player. He currently plays as the offensive tackle at the University of Southern California. Alijah rose to fame in late 2020 when he won Morris Trophy and was selected into the First team All-Pac-12. Tucker recently declared his name for the 2021 NFL draft.

Alijah Vera-Tucker was born Solomon Alijah Vera-Tucker on June 17, 1999, in Oakland, California. He is the only child born to his mother Rhoda and her former husband. His parents separated soon after Alijah's birth. Rhoda later married Sylvester Vera and gave birth to his two little sisters named Velia and Rosalinda. The football player graduated from Bishop O'Dowd High School and enrolled at the University of Southern California. Alijah stands six feet and four inches tall and weighs 143 kgs ( 315 lb).

Tucker started playing Football from High School days as an offensive tackle and defensive end on the football team. At the end of senior year, Alijah was named an Under Armour All-American. Vera-Tucker was rated a four-star recruit and several top universities like Washington, Oregon, Arizona, California, UCLA, and a few more made a race to sign him but, Alijah decided to remain with USC.

In the freshman year, Alijah played in all 12 of the Trojans games as a reserve guard and special teams. Associated Press named him in the first Team All-Pac Conference team. After completing his Sophomore year, many expected him to enter for the 2020 NFL draft but, he committed to playing for his college team in Junior year.

In 2020, Tucker won Morris Trophy and was named into the First team All-Pac-12. He has listed his name for the 2021 NFL draft, along with Christian Darrisaw and Gregory Rousseau.

Alijah is currently playing for his University team. As per sources, It is against NCAA rules for any athlete to receive compensation for playing a sport. The players have a scholarship that covers their tuition fees and other bills as well. Tucker is yet to start his professional career.

Alijah has listed his name for the 2021 NFL draft and is expected to be picked in the first round. The average salary of a Rookie NFL player is more than $450,000. He shall be making millions once; he gets picked by a franchise.

Who is Alijah Vera-Tucker Dating? Know About His Girlfriend

Alijah is young and unmarried but is dating his girlfriend, Jessie. The love birds have in a relationship with each other for more than five years. The duo met each other in High School and have been together ever since. Jessie is currently studying at the University of Redlands. She also plays American football. 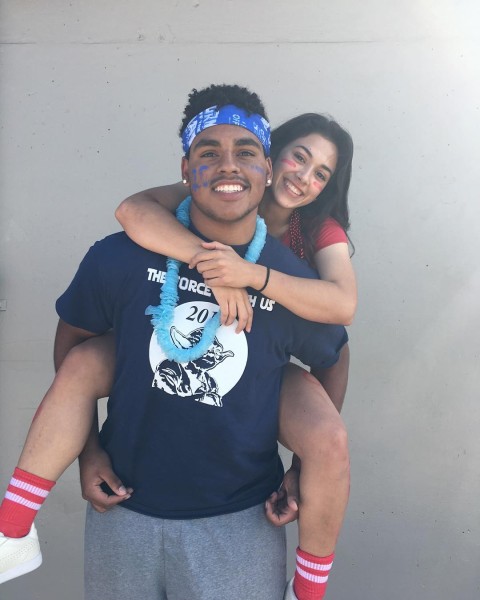 Both of them seem to be very much supportive of each other. Tucker's girlfriend keeps attending his games. The love birds are yet to get engaged or tie their wedding knot.