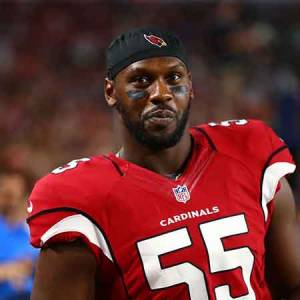 Chandler Jones is an American football player who currently plays as the defensive end for the Arizona Cardinals of the NFL.

He was drafted by the New England Patriots with the 21s overall pick in the 2012 NFL Draft.

Chandler James Jones was born on February 27, 1990, in Rochester, New York. His parents Camille and Arthur Jones had two other sons besides Jones named Arthur Willis Jones III and Jonathan Dwight Jones. He attended the Union-Endicott High school where he played for the school's football team.

Graduating high school, Jones enrolled in Syracuse University where he continued with football. During his junior years at Syracuse, he was only able to play in seven games due to injury but was still selected for the All-Big East selection with his record of 39 tackles and 4.5 sacks. Jones forwent his senior season and entered the 2012 NFL Draft.

In the 2012 NFL Draft, Chandler Jones was selected by the New England Patriots with the 21st pick of the first round. He signed a four-year contract with the Patriots on May 23, 2012.

Chandler Jones was included in the starting position in his rookie years. In the 1st week, he was able to strip-sack Jake Locker, the quarterback of the Tennessee Titans which ended up leading to a touchdown by fellow rookie teammate Dont'a Hightower. By the end of his rookie season, Jones had produced 45 tackles, 6 sacks, 5 passes defended, and 3 forced fumbles.

In 2013, Jones was able to score the first touchdown of his career from a fumble of the Baltimore clubs quarterback Tyrod Taylor which he recovered. Jones was the starter for all 16 games of the 2013 season. He ended the season with a record of 11.5 sacks, 1 forced fumble and a fumble recovery returned for a touchdown.

In the 2014 season, Chandler Jones was able to win his first Super Bowl ring with the Patriots defeating the Seattle Seahawks 28-24 in Super Bowl XLIXL. He ended the season with 43 tackles and 6 sacks in 10 games. The Patriots picked up the option on Jones' contract on April 30, 2015. He continued to perform well throughout the 2015 season ending with a new career high of 12.5 sacks as well his first career interception.

The Patriots traded Chandler Jones to the Arizona Cardinals on March 15, 2016, in exchange for Jonathan Cooper and a second-round pick in the 2016 NFL Draft. Jones became the starter for the Cardinals and played all 16 games for the Cardinals' 2016 season. He records49 tackles, 11 sacks, three passes defended and four forced fumbles at the end of the 2016 season.

On March 10, 2017, Chandler Jones signed a five-year, $82.5 million contract extension with the Cardinals. He was named to his second Pro Bowl on December 19, 2017. He finished the 2017 season with the stat of 17 sacks which is the highest in Cardinals' franchise history.

Chandler Jones has not been married to date and does not have a wife or children. However, it is not known as to whether he is currently in a relationship or not. There have been no news or rumors of him having a girlfriend at the moment.

Over the course of seven seasons as a professional player, Chandler Jones has reportedly earned $50.47 million. His net worth at present is reported to be over $40 million. In 2017, he signed a five-year, $82.5 million contracts extension with the Cardinals which only shows that his net worth shall only increase in the future. His salary for 2018 caps at $15.5 million

With all his financial success, he is happy to indulge in luxurious purchases like the $2.925 million worth of house in Paradise Valley, Arizona.