Doug Costin is a professional American football player who plays defensive tackle. After his release from the Pittsburgh Steelers, he is now a free agent. So far, Doug has made his appearance for three NFL and one United States football league teams, such as Jacksonville Jaguars, Cincinnati Bengals, Pittsburg Steelers, and Birmingham Stallions. Also, he played college football in Miami (OH).

Former Birmingham Stallions key player Doug Costin is the West Chester, Pennsylvania boy born on October 5, 1997. At this time of writing, the defensive tackle is just 25 years old. The 6 ft 2 inches tall player star sign is Libra. Regarding his family background, he came from a black racial community. He was born to American parents, Douglas Costin and Tina Costin. Apart from thier name, there is nothing much on his family matter.

Salary And Net Worth Details

Doug Costin has been making his presence in various leagues around the globe since 2020. Since 2020, he has been playing for four teams, creating a fair sum of money. We know that drafting into the NFL only means a lot to the player mentally and financially. After the player is drafted into NFL, he is sure to make his salary number six figures. When he signed a contract with the Pittsburg Steelers in 2022, he welcomed staggering annual pay of $8,25,000 per annum.

Likewise, previously with Jackson Jaguars, he received $6,12,500 playing for the team. Thus, his present pecuniary resources are calculated at $3 Million. He is a free agent, so he is grinding hard to get back on the team. Despite that, he is enjoying his relaxation time with his family. It is common for various NFL players to get into deals with multiple endorsement brands, so Doug gets his payment for his role.

Before playing professional American football, he initially played at the college level for Miami University, recording 50 games with 178 tackles and 17 sacks. To your knowledge, Doug was the 2020 NFL undrafted player, but luckily, he made it to the NFL after Jacksonville Jaguars sighed him on April 25, 2020. After two seasons with the team, he joined a fellow club Cincinnati Bengals practice squad, on January 18, 2022. 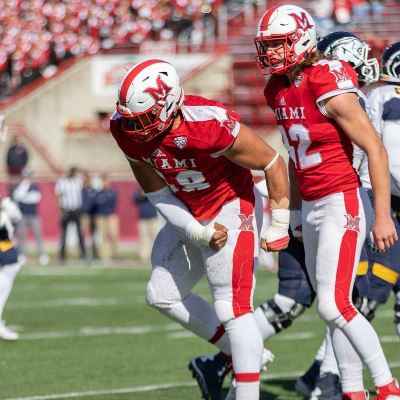 Doug Costin's love life is very suspenseful. It is also one of the most asked queries by his fans. Despite being asked by the masses, he still keeps it very confidential. Ex Cincinnati Bengals appear to be very good secret keepers. Hence, it isn't easy to find out about his love facts. Therefore, due to the absence of its data, we express that he is probably single and unmarried.

Doug is easily accessible on social media platforms. He seems more active on Instagram compared to others. He has a verified Instagram handle @dougcostin with 4091 fan followers on it. Moreover, most of his Instagram feeds are full of his career photos hinting at his love for his profession.