Diogo Dalot is a professional football player from Portugal and currently plays for Premier League club Manchester United. He plays in the right-back position for Manchester United. He transferred from Porto to Man U in 2018. He wears the Number 20 shirt for his current club. He mainly plays in the right-back position, but he can also play in the left-back place.

United's Number 20 also plays for the Portugal national team. He was included in Portugal's leading team in 2021. Starting his club career in FC Porto, he won Portugal's top league, Premier Liga, in the 2017-18 season.

The Net Worth of Diogo || His Income and His Properties

Portugal's young right-back Diogo has an estimated net worth of $2 million approximately. His earnings mainly come from his professional football. Besides that, he also earns from sponsorships deals with various major brands like Nike. 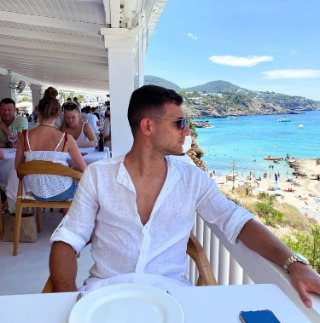 Moreover, Dalot lives with his sweetheart in England but rarely flexes his cars and luxuries. But no doubt, he is fond of visiting different places and often shares them on his social media.

Read:- What is the Net worth of Lotomba? His salary and contract with Nice

In July 2018, Manchester United bought Diogo from FC Porto for the sum of €22 million. At that time, he was just 20 years old.

After two seasons of spending with Man U, they loaned him to the Italian club AC Milan, where he spent one year. The loan fee was 5000 thousand pounds. Then in 2021, his loan to Milan was ended, and he returned back to the United. 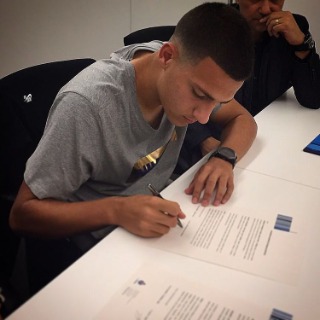 Also, he is one of the latest paid football players in United. Players with less salary than him are McTominay, Mengi, and Tom Heaton.

But the salary of Manchester players is high as their star Manchester United Cristiano Ronaldo, earns £24,960,000 per year.

Diogo Dalot and his sponsorship with Nike

One of the major sponsors of Diogo Dalot is Nike, a famous accessories manufacturer brand.

Though it is not sure when Dalot signed a contract with Nike, they have been in business for too long. As per reports, Nike has been sponsoring United's right-back from even before 2015. And their partnership has been worth fruitful to both parties. Dalot also frequently posts and promotes them through his Insta.

In August 2021, he posted a short clip of him with the Nike football boots with the caption,

Who is Dalot's date? Is he still dating or married?

Based on our research and findings, Diogo Dalot is currently dating his love, Claudia Lopes. The couple has been together for more than two years.

Sources claim that Dalot and his girlfriend Lopes started dating in early 2020 before revealing after a few months. Furthermore, Dalot often posts images with his girlfriend on Instagram. His girlfriend, Claudia, appears to be an interior designer who is associated with Home Design.

Who is Diogo's future wife, Claudia?

Cláudia Pinto Lopes is a beautiful blonde girl who is currently dating Manchester United star Diogo Dalot. She is mainly known for becoming the girlfriend of D. Dalot. 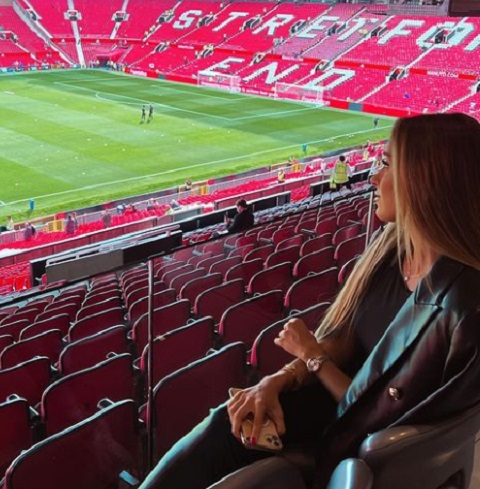 She was born on May 13, 1995, making her four years older than her love Diogo, who was born in 1999. She is also Portuguese by nationality. She has blonde hair and appears average in height, measuring 5 feet 4 inches.

Every year, he wishes for his girlfriend through Instagram. On May 13, 2021, he wanted to tell her he was the woman of his dreams. He wrote,

"Happy birthday to the Woman of my dreams. Love You @claudiaspintolopes"

Like her bf, she is also active on Instagram with the username @claudiaspintolopes and has more than 25.8k followers.

She is also an Instagram model and shares photos of herself frequently. Most of her Insta pics are of her own wearing nice dresses. Also, she sometimes posts with her date Diogo.

He lives in England along with his love Claudia and his dog. Dalot's dog is Young JD, of the German shepherd breed. He sometimes posts his photos with the dog on his Instagram. He considers his dog Young JD as his family.

Diogo Dalot support for No to Racism

Racism has been one of the major problems among football payers. Several top players have been affected by it, and many players have stood against it. In this case, Diogo Dalot is not different from others. He is frequently against racism and often posts them.

"We, the Players, stand together with the singular objective of eradicating racial prejudice wherever it exists, to bring about a global society of inclusion, respect, and equal opportunities for All, regardless of their colour or creed."

Born in Portugal, he holds citizenship of the same country; he has been playing for them for more than seven years. He made his debut for Portugal's U15 team in 2014. He made two appearances for the team before playing for the U16 team. Finally, in 2021, he was promoted to the Senior team of Portugal and has already made over four appearances. Besides, Dalot is included in the national team playing in the FIFA World Cup 2022.

From his childhood, he was very much interested in playing football and desired his family's background of singing. When he was nine years old, he joined the youth team of FC Porto, a top club in Portugal. 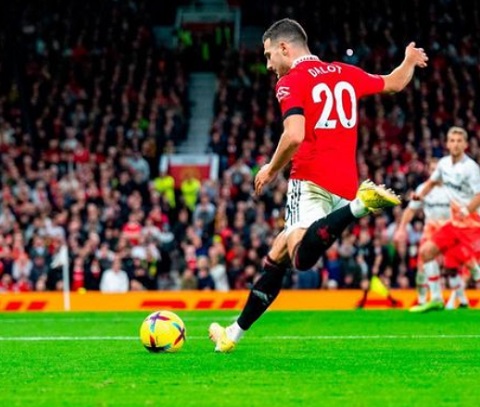 After spending nine years in the youth team, he was included in Porto's B team. And eventually, the same year, he was promoted to their senior team. He made his debut on October 13, 2017, after just eight years of his debut for the B team of FC Porto.

Moving onwards, Dalot has a height of 6 feet 0 inches (1.83 meters). He has an average body weight of 78 kg. He has short well-trimmed hair with a black eye.

His strength is his physicality, along with his speed and techniques. He is also influential in the offense position and often plays as a right-wing back.

Who is Dalot? Personal Information and Early Life

José Diogo Dalot Teixeira was born on March 18, 1999, in Braga, Portugal, and his birth sign is Pisces.

He was born to his father, Antonio Jacinto Teixeira, and his mother, Anabela Dalot Teixeira. According to the source, Dalot's parents were devoted Christians and used to sing in the church. 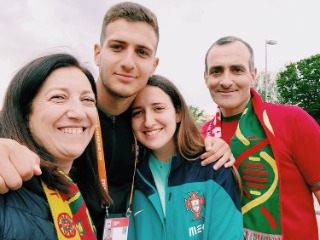 He sometimes shares photos of his mom and dad on his social media, often thanking them for helping him whatever he is today.

Dalot and his singer sister

He grew up in the city of Portugal along with his sister Mariana Dalot. He even considered her as his best friend as his sis used to support him and share things. His sister also followed their parent's footsteps and also sang in the church. Even more, she is also a professional singer. 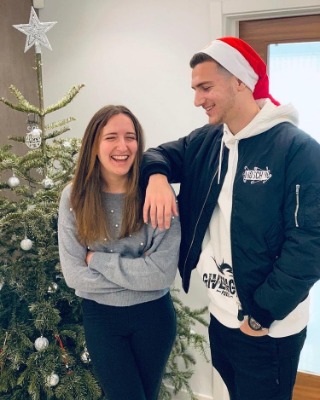 She is also very active on Instagram, sharing photos about her profession and daily life. She goes by the username @marianadalot, which has more than 13.1K followers. According to her Insta, she graduated with vocals in London.

Diogo Dalot's sis once posted her photos with her brother where she said,

"I realized that nothing would give me more joy in life than watching you grow up. You are my only certainty in life and that gives me the encouragement I need to live. here or at the end of the world. congratulations "