Ezekiel Tobechukwu Nnaji, simply known as Zeke Nnaji, is an American college basketball player for the Arizona Wildcats of the Pac-12 Conference. The 7-footer averaged 16.1 points and 8.6 rebounds per game for the Wildcats, establishing himself as one of the hardest-playing big men. After freshman season, he declared for the 2020 NBA Draft.

Minneapolis, Minnesota native, Nnaji was born on 9th January 2001, under the star sign Capricorn. The nineteen-year-old holds an American nationality who came from Afro-American ethnicity.

Zeke Nnaji 2020 NBA Draft: How Much is his Projected Salary?

No. 22 – Arizona Wildcats' power forward, Zeke is one of the most prolific and productive freshmen in the nation after coming into Arizona as their third highest-rated recruit after Nico Mannion and Josh Green.

Nnaji told ESPN in an email, "Ever since 4th grade I have had the dream of playing professional basketball in the NBA. After consulting with my family and praying about it, we have submitted the required paperwork to the league office. I'm officially making myself available for the draft." 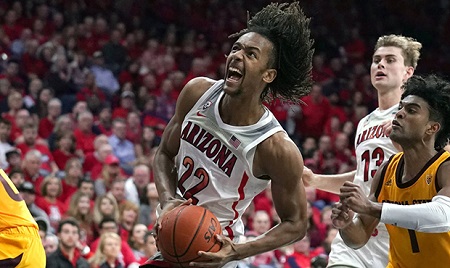 If Nanji goes pick as per speculation, he does not have the same contract as Alen, but it would be quite similar.

The nineteen years old basketball player, Zeke Nanji is preparing for up-coming NBA Draft. As a matter of fact, he has maintained his personal life as secret as possible. This may be because he does not want any drag attention because of his personal life.

With less to no information about his personal life, Nnaji is believed to be single

Nnaji's father, Apham is from Nigeria, who sang/toured in a band while in college, back when disco, funk, and soul music was most prominent in his part of the world. On the other hand, his mother, Janel, is from Minnesota.

What's more, walking in his after footstep, hee has played the piano since first grade and now composes his music. Regarding sports, Nanji started playing basketball, soccer, track, and field, and football at an early age. However, in the last year or so, he realized that he genuinely enjoyed playing basketball more than the other sports. Thus, he decided to focus on improving his basketball skills and participate in personal training to enhance his abilities.

He enrolled at Lakeville North High School and then transferred to Hopkins High School, where his younger sister, Maya, is a highly regarded high school basketball recruit.

Upon graduation, Zeke committed to play college basketball for Arizona.