Denzel Dumfries is a rising Dutch professional football player. He is currently playing for the Serie A club Inter Milan. Denzel plays as a Right-back for his team and sometimes can also play as a center-back. Dumfries made his professional debut in 2014 with Sparta Rotterdam. Dezel wears the no.2 jersey while representing his club.

Denzel Dumfries has an estimated net worth of more than $3 Million. He earns a weekly wage of £55,000 and £2,860,000 as his annual salary. Denzel has a market valuation of €25 Million. Dumfries must be making a reasonable sum through his sponsorship and advertising deals. 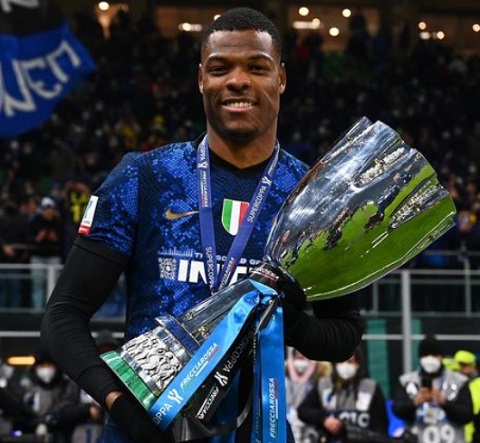 Furthermore, his deal with the current team is €14.25 million. Moreover, Dumfries is still playing actively, and there is no doubt that the footballer will earn more in the coming years.

Who is Denzel Dumfries Dating? Know About His Girlfriend

Denzel Dumfries is involved in a romantic relationship with his longtime girlfriend, Jaimy Kenswiel. The duo has been together for more than five years. Nothing much about their first meeting instance is shared with the public. Although Dumfries has shared only a few pictures of them, His girlfriend, Jaimy, has shared photos dating back to June 2016. 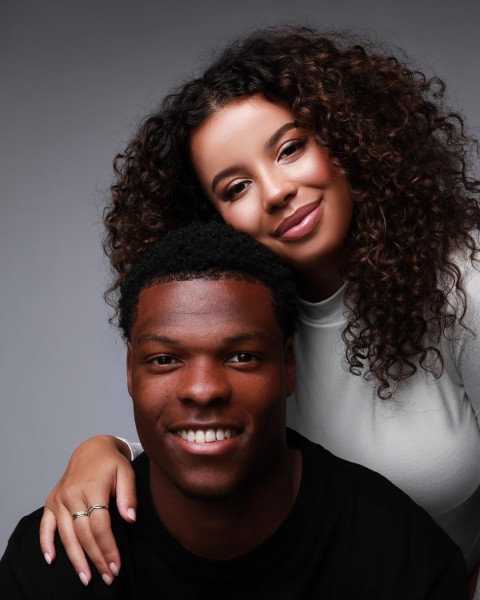 It's been more than five years of their relationship, but they are yet to get engaged or tie their wedding knot. In March 2020, His girlfriend opened up about expecting a baby boy shortly through a post on her Instagram timeline. The duo welcomed their first child in September 2020.

Besides, the Instagram bio of Kenswiel shows that she is the mother of two kids. So, it can be said that the duo has already welcomed their second child too.

Denzel started training football from a very early age with the Spartan'20 youth team. In 2002, He moved to the VV Smitshoek youth team and played with its youth club for over a decade. The Dutch footballer left amateur side Barendrecht for Sparta Rotterdam in 2014 and made his professional debut on February 20, 2015, against FC Emmen. The following season, Denzel was part of the senior team and won the Eerste Divisie Talent of the Year Award that same year.

In 2017, Denzel moved to Heerenveen club after appearing in sixty-five games and scoring two goals for the Rotterdam. Dumfries played for the team for a season and then signed a five-year contract for PSV Eindhoven in June 2018. With PSV, The Dutch international has appeared in eighty-nine games and scored thirteen goals for the club. Since August 14, 2021, Dumfries has played for Serie A champions Inter Milan.

Regarding his international appearance, Denzel accepted the offer to play for the Aruba national football team in 2014. In 2016, Dumfries committed to play for the Netherlands U20 team and appeared in four games. Until 2018, He was part of the Netherlands U21 team and made his senior team debut under the leadership of Ronald Koeman in a match against Germany in 2018.

In June 2021, Denzel was named for the UEFA Euro 2020 and Wout Weghorst and Cody Gakpo. In June 2021, He scored his first international goal against Ukraine. As we know, the Dutch national team is also playing in the  FIFA World Cup, and Dumfries is in the squad.