Davide Santon was born on January 2, 1991, in Portomarggiore, Italy. He is the son of Mirco Santon and Renata Santon. Much about his parents and early life is still under the limelight. Davide did not continue his formal education after the basic level. Santon stands six feet and one inch tall and weighs 83 kg.

Davide Santon's Net Worth and Earnings

Davide Santon has an estimated net worth of more than $10 Million. He was earned most of his net worth through his salary and contract with the football clubs. A football player makes a handsome amount from their sponsorship and advertising deals. Davide has an annual salary of £2,496,000 while playing with AS Roma. 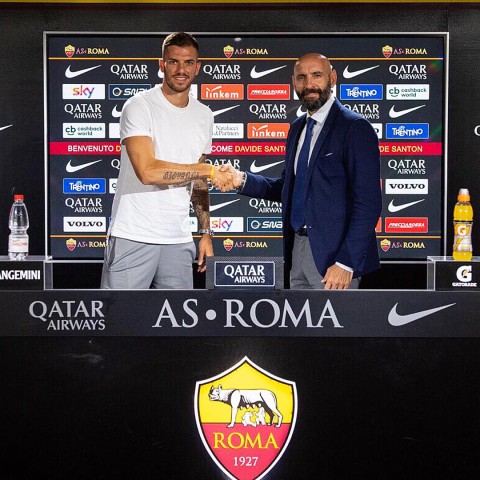 Davide is currently playing in the Serie A with AS Roma SOURCE: [email protected]

Santon signed a  4-year contract worth €9.5 million with Roma in 2018. He is very early in his career, and many top clubs are keeping a close eye on him as his contract will expire in the coming season. Davide played with F.C. Internazionale for three-season and signed a €4.893 million contract with the club in 2015. In 2011, Newcastle United bought him for €4 million from Inter Milan.

Santon is a married man living a happy married life and his wife and their children. Davide walked down his wedding aisle along with Chloe Santon on September 26, 2020, in a private wedding ceremony in his hometown. They had invited only a few close friends and family members from both families. The duo had been dating each other for several years before their marriage and have not shared about their first meeting experience. Davide shares a photo with his wife and their daughter SOURCE: [email protected]

Davide and Santon welcomed their first child, a daughter, Sienna Santon, in 2013. Shortly after their wedding, Santon opened about expecting their second child through a post on his Instagram. They have not shared the gender or the name of the child.

Football Career of A Decade

Davide started training with the youth team of Ravenna in 1999. He later moved to Inter Milan's youth academy in 2005. After spending three-season, Santon got his breakthrough in the senior team and played with the club until 2010. For the 2011 season, Davide was loaned to Cesena for a season. In mid-2011, Newcastle United signed him on a five-year contract for an undisclosed fee.

Santon had a decent career in the English Premier league. He appeared in eighty-two matches in five seasons. Davide moved back to Italy and signed with former club Inter Milan for a three-year contract until 2018. In June 2018, After many ups and downs, He signed with AS Roms for a four-year contract worth €9.5 million. Santon has rejected several extension offers from Roma.

Davide had represented Italy in numerous divisions before making his senior team debut in 2009. He appeared in eight games with Italy until 2013 and has not been called since then.