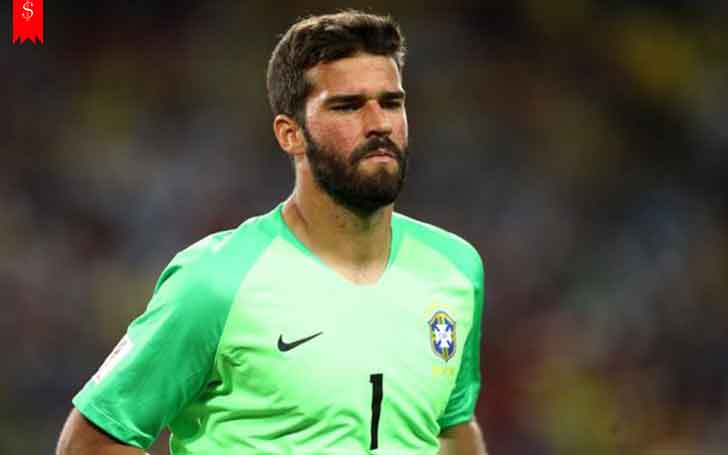 Alisson Ramses Becker or famously known as Alisson Becker is a professional Brazilian football player who plays a goalkeeper for Italian football club, AS Roma and Brazilan national team.

He is currently inducted into the 23 man's squad for the 2018 FIFA World Cup in Russia as a Brazilian national team's goalkeeper.

He started his senior playing career with the Brazilian football club, Sports Club Internacional in 2013 and after playing a couple of seasons before leaving the club in 2016.

The Brazilian goalkeeper, later on, moved to Italy and signed a five-year contract with the Italian Serie A club,  AS Roma for a reported transfer fee of €7.5 million in 2016.

He made his senior international debut for Brazil against Venezuela during the 2018 FIFA World Cup Qualifiers played on 13 October 2015.

Becker was included in the 23 men Brazilain football squad led by the captain, Thiago Silva along with players such as Neymar and Miranda at the 2018 FIFA World Cup at Russia.

He has played the four matches at the 2018 FIFA World Cup at Russia and has kept three clean sheets while conceding a goal against Switzerland.

Alisson  Becker's  Net worth and Salary

His annual salary is around €1.5 million with a weekly salary in the range of € 28,000 which he receives from playing club football for Italian professional football club, AS Roma and has a market worth of €60 million as of early June 2018.

Looking at his professional playing career, his net worth from playing for several clubs like SC Internacional and AS Roma combined with his assets and endorsing products like Nike, totals a sum of around $9 million.

He also had an endorsement deal with a famous Shampoo brand Head and Shoulders for Men.

With his total accumulated amount of fortune, he has several assets like house and fleet of luxurious cars and loves to spend his time with his family.

With his impressive net worth, he seems to live an extravagant lifestyle and is often seen vacationing his free time at the most exotic and memorable places around the world.