Tino Kadewere is a rising Zimbabwean professional football player. He is currently playing in the French football league, Ligue 1 club, Lyon. Tino has been playing in professional matches since 2015. Kadewere plays as a Striker and Winger for his club and country.

Tino Kadewere was born Philana Tinotenda "Tino" Kadewere on January 5, 1996, in Highfield, Zimbabwe. He is the son of Onias Kadewere and Mavis Kadewere. Much about his parents and his early life is still under the radar. Tino stands six feet in height and weighs 72 kg.

Tino Kadewere's Earnings and Net Worth

Tino Kadewere has an estimated net worth of more than $5 Million. He has gathered most of his net worth through his successful football career. Kadewere is among the highest-earning player representing his country. In 2020, The player had a gross income of €90 000 (US$ 98 000) per month and €720 000 (US$ 781 000) per season, making him the highest-earning player in the Ligue 2. Tino has an annual salary of $2.2 Million with Lyon. He signed a contract worth more than $16 Million with the French club. Kadewere is very early in his career and will be adding millions in the future.

Tino is very open about his relationship status. The football player is dating his longtime girlfriend, Sharo Kadewere. The love birds have been together since their childhood. They are the proud parents of two children. Their first son, Keith, was born in early 2014. The family of three extended to four with a second son, Khamie, in October 2019. 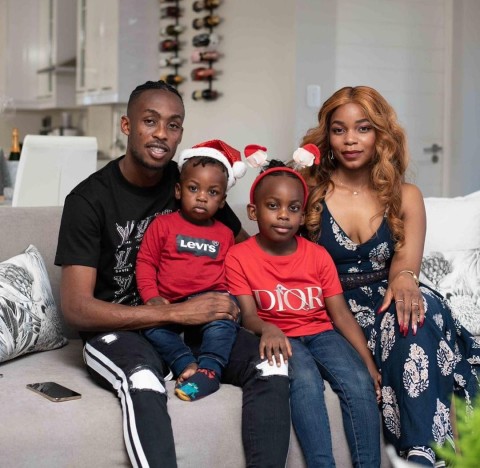 Tino and Sharo are yet to exchange their wedding vows. The family of four is living a happy life. The football player regularly shares photos of his children and his wife in his profile. Tino spends most of his free time with his two children.

Tino started playing football along with his parents and siblings in their backyard. He played and trained with Prince Edward School, and in 2014 Talent scouts found him and signed with Harare City. Kadewere trained with the youth team for a season in 2014 and then made his debut in 2015 for Harare City senior team. At the end of the season, He was loaned to Djurgardens IF for the rest of the season and appeared in five games.

In early 2016, The Swedish first division club signed him after trial. He gave a trial with the Frech Ligue 2 side Sochaux. Kadewere later joined Djurgården for a reported sum of 150K Euros. Tino appeared in forty-three games in the next two seasons and scored thirteen goals. In early 2018, Le Harve signed him for a reported $2.5 million contract for four years.

In 2020, Lyon signed him for an undisclosed amount. However, He was loaned to Havre for the rest of the season. Tino has represented the national team in nineteen games and scored three goals.