2015 All American 400 Winner Daniel Hemric is a well-known professional stock car racing driver. He has been racing at the professional level for more than a decade. Hemric competes full-time in the NASCAR Xfinity Series, driving the No. 18 Toyota Supra for Joe Gibbs Racing.

Daniel Hamric was born on January 27, 1991, in Kannapolis, North Carolina. He is the son of Brian Hemric and his wife. Daniel is yet to share a word about his parents and his early life with the public. Hemric started his driving career in his early days, so; he did not officially finish his academics. Daniel holds American nationality and belongs to mixed family background.

Daniel Hemric has an estimated net worth of more than $5 Million. He has earned most of his net worth through his successful career in stock car racing. As NASCAR has banned the players and the association from releasing the racers' salary, earnings, and prize money, the information gap has been increasing. 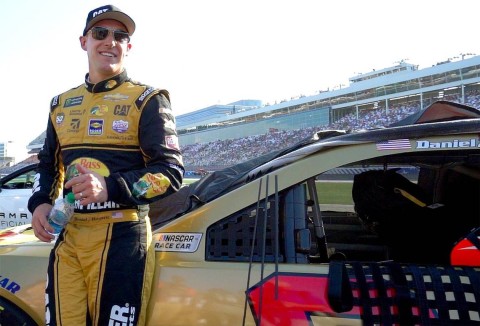 Hemric receives an annual salary of $550,000 working with the Joe Gibbs Racing. A stock car driver makes a handsome amount through their sponsorship and advertising deals. Daniel has a sponsorship will OnDeck, Poppy Bank Paint, and a few more. Until 2015, The American racer took home $473,079 as his prize money from three seasons and his Camoing World Truck Series salary. In 2010, Hemric made $1,645 from NASCAR Whelen Southern Modified Tour.

Who is Daniel Hemric Married To? Know About His Wife, Children and Relationship Status

Daniel is a married man living a happy married life along with his wife and children. Daniel walked down his wedding aisle along with Kenzie Ruston Hemric on January 7, 2017, at a destination wedding in Jamaica. They had been dating for several years before walking down their wedding aisle. The couple got engaged on July 28, 2015, and shared the news through their social media accounts. Daniel shares a photo with his wife and daughter SOURCE: [email protected] Hemric.

Kenzie is an American professional stock car racing driver. She competed in her last game in the 2015 NASCAR K&N Pro Series East. In late 2019, The duo opened about expecting their first child shortly. On May 9, 2020, Kenzie gave birth to their first child, Rhen Haven.

Daniel started driving cars from the get of five competing in go-kart racing at the 1/5-mile Concord Speedway. He won numerous races before moving to Legends cars in 2008. Hemric won 2010 Legends Million at Charlotte Motor Speedway, winning the largest paycheck in Legends car history, $250,000. The American racer won his second title at the 2012 JEGS/CRA All-Stars Tour.

Daniel raced for the Brad Keselowski Racing until 2016 and then moved to JR Motorsports. Hemric raced in the NASCAR Cup Series for two seasons racing in thirty-eight races. He has raced in 112 races in the NASCAR Xfinity Series in four years career. Since 2021, Daniel has been driving for the Joe Gibbs Racings.