2021 All-Star Open winner Aric Almirola is a well-recognized figure in Stock car racing. Aric is a professional stock car racing driver. He has been competing in professional events for more than fifteen years. Almirola has competed in more than 500 racing events in his career. Aric competes full-time in the NASCAR Cup Series, driving the No. 10 Ford Mustang for Stewart-Haas Racing.

Aric Almirola was born Aric Michael Almirola on March 14, 1984, in Fort Walton Beach, Florida. He is among the four children born to Raphh Almirola Jr. and his wife, Bobbi Almirola. Aric holds American nationality and is of Cuban descent. Almirola graduated from Hillsborough High School and enrolled at the University of Central Florida for a Mechanical engineering degree. Aric stands exactly six feet and weighs 73 kg.

Aric Almirola has an estimated net worth of more than $20 Million. He is among the highest-earning stock car driver currently working in the industry. Since 2015, there has been no report of his earning, but before that, The American stock car driver had earned more than $23 Million as his earning from eight professional years. Also, Aric must be making a handsome amount through his sponsorship and advertising deals with numerous brands. 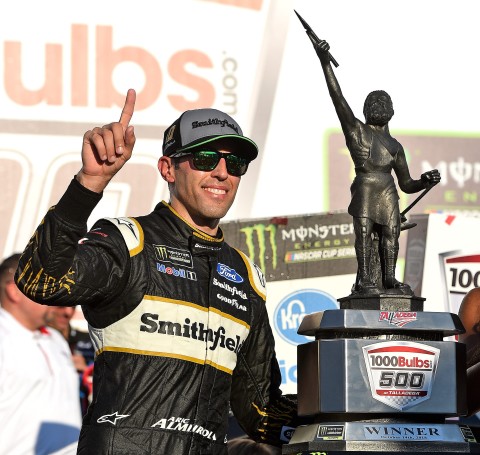 After racing in just six events, Aric took home $493,830 as his prize money in his rookie year. The following season, He made $1,356,811 as his earning, finishing in the top ten in the event out of twelve events played. In 2009, Almirola raced in just eight games and earned $901,563 as his prize money. In 2012, The American racer peak in his career racing with the Richard Petty Motorsports and took home $4,753,521, finishing in top-5 in an event.

In 2013, Aric raced in thirty-four events and made $4,729,429 as his prize money and salary finishing six times in the top ten. In 2014, He won his first title and earned $5,082,924, which remains his highest-disclosed enring in a single season. The following season, Almirola had similar earnings of $5,014,786 racing in thirty-six events.

Aric is married to his longtime girlfriend, Janice Almirola. The duo exchanged their wedding vows in 2010 after dating for several years. Shortly after the wedding, The pair welcomed their first child, Alex, in September 2012. In November 2013, The family of three extended to four with the birth of a daughter, Abby. The family of four is living a happy married life.

Aric started his career playing for the Joe Gibbs Racing in 2007. He moved up into modifieds and won several Rookie of the Year awards. In 2012, Almirola signed with Richard Petty Motorsports and won his first title at the 2014 Coke Zero 1400. In 2018, Aric won the 1000Bulbs.com 500. He has been part of the NASCAR Cup series since 2008 and has raced in 380 races to date. He won his last event at the 2021 Foxwoods Resort Casino 301 in London.