Courtney Vandersloot is a Hungarian-American professional basketball player who plays in the Women's National Basketball Association (WNBA) for Chicago Sky as their point guard. Courtney was selected 3rd overall by the Chicago Sky in the 2011 WNBA draft and played for different teams like Besiktas, Wisla Can Pack. Yakin Dogu, etc.

Vandersloot is currently receiving an annual average salary of around $113,000 whereas her net worth is estimated to be above $1 million as of 2019. Vandersloot's relationship details are mentioned below:

Courtney Vandersloot is a Lesbian; Who is Courtney's Partner?

A huge percentage of WNBA players have committed being LBGT. While several players including Sue Bird, Becky Hammon, DeWanna Bonner, etc, have come out of the closet, Courtney Vandersloot also revealed being a lesbian and is married to her girlfriend Allie Quigley.

Vandersloot tied the knot with her partner Allie on December 27, 2018, in Setalle north of her hometown Kent, Washington on Thursday. Courtney and her spouse had been dating each other for a very long time and they are currently playing for the same team. 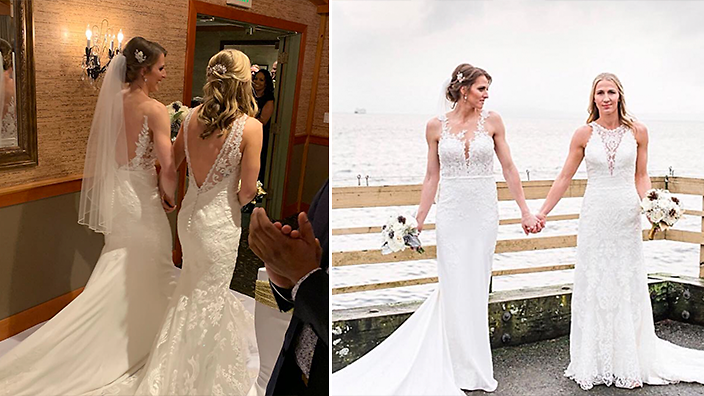 The lavish wedding ceremony was attended by many WNBA players which includes Diamond DeShields and Gabby Williams and Vandersloot's family members. The couple looked beautiful and gorgeous in their white wedding dress.

Courtney seems to be frank in nature since many of the players don't publicly show their sexual orientation as a lesbian but she publicly married her girlfriend. They are also regarded as the new power couple in the WNBA. Since they have just started their newly married life so let's hope their relationship last long.

Courtney is an energetic and attractive player with 5feet 8 inch (1.73 meters) tall in height and weighs around 145 lbs (65.0 kg). Talking about her age, she is currently 30 years old.

Courtney Vandersloot Net Worth and Salary in 2019; Her Career Earnings

The exact figure of Courtney Vandersloot has not been reported but she might have an estimated net worth of above $1 million as of 2019. Courtney's annual average salary is around $113,000 from Chicago Sky and her weekly salary is reported to be around $2173.

Courtney has been in her professional career for almost a decade so she has earned a decent amount of money so far which is reported to be above $3 million.

The WNBA players are paid quite less than that of the NBA players. WNBA players receive a salary amount between $71,635 to $115,500. The salary amount may alter as per the experience level but as reported by some of the sources the average salary in 2018 was around $79,000.

Having a dream won’t change the world. Sharing one will. #justdoit pic.twitter.com/vIw16Y4e3Q

Courtney has an endorsement deal with Nike as she mentioned about it on her official Twitter account.

Courtney Vandersloot was born to parents Bill and Jan Vandersloot in Kent, Washington on February 8, 1989. She is American-Hungarian by nationality and belongs to the white ethnic group.

During her early days, she wanted to be a soccer player and her favorite player was Mia Hamm but she started playing basketball after joining high school. She completed her high school from Kentwood Hgh School. Courtney joined the Gonzaga University for her higher studies and basketball career.

Courtney was considered one of the top prospects after her college career in the 2011 WNBA draft and was selected by the Chicago Sky. Former player John Stockton praised her saying that she is just like HHL player Wayne Gretzky and she is different from others.

Since 2011 Draft she has been with the Chicago Sky and hasn't left the team and currently, she is one of the highest paid players in the team.