Mariel Margaret Hamm-Garciaparra or famous known as Mia Hamm is a retired American women’s soccer who plays as a striker. She was the part of the American women soccer team that went on the win the Women’s World Cup twice in 1991 and 1999 finals and won the winners gold medal at the 1996 and 2004 summer Olympics.

The famous retired American soccer player has an estimated net worth over $10 million. Also, she is married to the legendary baseball player, Nomar Garciaparra. To know more about her in details, read every section of this biography.

Talking about her personal life, she got married for the first time with her college boyfriend, Christiaan Corry in 1994 and after years of the wedding got divorced in 2001.

She is currently married to an American baseball player, Nomar Garciaparra in 2003. The wedding took place at Goleta, California which was attended by less than a hundred guests.

Mia Hamm with her husband and children
SOURCE: Pinterest

The couple is blessed with 3 children, twin girls, Grace and Ava Caroline born on March 27, 2007, and a son, Garett Anthony born on January 2012. 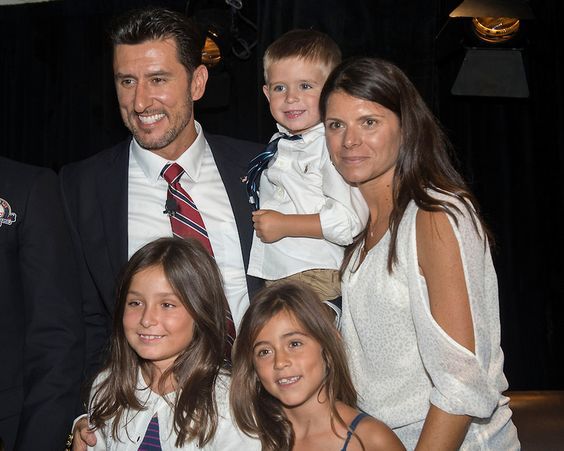 She has known for philanthropic particular through the Mia Hamm Foundation which she established in 1999. The foundation is dedicated to his deceased brother, Garret who died from a rare blood disease, aplastic anemia.

Likewise, she earned $85,000 as a salary in 2008. Additionally, she has an endorsement deals with several brands due to her marketable personality.

It was revealed that she purchased a home at the Manhattan Beach in New York that was reported to have cost around $2,200,000. Besides, her husband Nomar Garciaparra has an estimated net worth over $45 million. Further, he has collected around $74 million from his playing career.

Mia Hamm is of American nationality. She was born to mother, Stephanie Hamm, and father, Bill Hamm on March 17, 1972, in Selma, Alabama, United States of America.

Her father was an Air Force Pilot and cites her brother, Garrett Hamm encouraged her to take up sports and attended the University of North Carolina at Chapel Hill where she helped the team to win the NCAA women’s championship four successive seasons.

She began her junior playing career with  American soccer teams such as Notre Dame Knights and Lake Braddock Bruins.

Hamm started her senior playing professional club career with American professional women’s soccer club, Washington Freedom in 2001. She played 49 matches and scored 25 goals for the team before leaving the club in 2003.

Hailed as the greatest women soccer player of all time, she won the prestigious FIFA’s World Player of the Year in two consecutive years, 2001 and 2002.

Her other major accolades include Female Athlete of the Year for 5 consecutive years from 1994 to 1998 and several other accolades added to her name.

She created history by becoming the youngest player to play for the US national soccer team at the age of 15.

Hamm at one time had the record of the most international goals scored with career tally goal of 158 which later surpassed by fellow countrywoman Abby Wambach.

She, along with fellow US soccer teammate, Michelle Akers had distinct honors to be named at  FIFA list of 125 Greatest Living Soocer players in 2004.

The list had legends such as Portuguese, Luis Figo, French, Zinedine Zidane, and Argentinian, Diego Maradona to name a few. She was first of two women along with Akers as well as first American player to be included in the list.