Corey Daniel LaJoie is an American professional stock car racing driver who competes full-time in the NASCAR Cup Series. He drives the No. 7 Chevrolet Camaro ZL1 1LE for Spire Motorsports. Other than that, LaJoie  is the son of 2X  NASCAR Busch Series champion Randy LaJoie.

Charlotte, North Carolina native, Corey LaJoie was born on 25th September 1991, under the star sign Libra. The twenty-nine years old holds an American nationality and is of white ethnic background. He stands 6 ft 1 in (1.85 m) tall and weighs 180 lb (82 kg).

Unlike other athletes, the racer has sponsorship and endorsement too. Though he already has some sponsorship, LaJoie is yet to make the big one.

NASCAR Cup driver Corey LaJoie is a married man. He tied the knot with his long-time girlfriend, Kelly, on December 31, 2018.

LaJoie shared the news of his wedding on his Facebook with a stunning wedding photo of them in a loving embrace. The caption on the post read: “So I get to marry my best friend today. Happy New Year to everyone! #TheJoieofLove.” 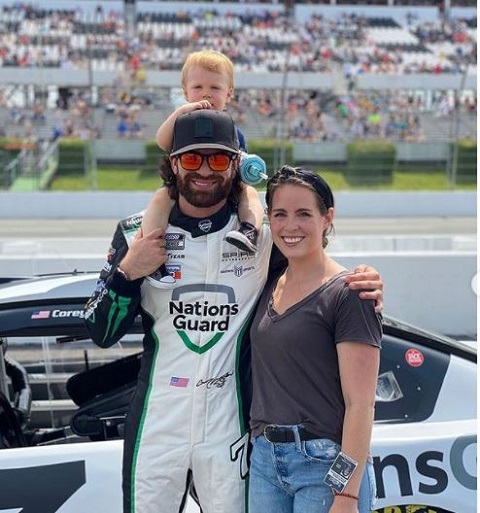 Corey LaJoie with his wife and son SOURCE: Instagram @coreylajoie

On 10th March 2020, LaJoie and wife Kelly welcomed their first child, Levi Ronnie, into the world.  Well, their baby was expected around April 12, 2020, but came much earlier.

In 1996, LaJoie began his racing career, competing in kart racing events. He won 19 times on both dirt and asphalt tracks. In 2003, he moved to the INEX Bandolero series, where he won 12 wins and winning the series' Summer Shootout Championship.

In 2009, he made his debut in the NASCAR Camping World East Series at Thompson Speedway.  LaJoie remained in the series through the 2012 season. In June 2012, he won his first series at Bowman Gray Stadium.

In November 2013, LaJoie made his NASCAR Nationwide Series debut at Homestead-Miami Speedway, driving the No. 9 Ford for Richard Petty Motorsports.

In September 2014, he made his Sprint Cup Series debut in the Sylvania 300 at Loudon, representing Randy Humphrey Racing.

In 2016, he returned to NASCAR driving the No. 24 Toyota Camry for JGL Racing in the Xfinity Series at Atlanta Motor Speedway.

In 2017, LaJoie returned to the Cup Series and signed with BK Racing, driving the No. 83 Camry part-time.