Connor Clifton is an American professional ice hockey defenseman. As of 2019, he plays for the Boston Bruins of the National Hockey League (NHL). He finished his colligate career playing for Quinnipiac University. Quinnipiac University. Furthermore, he is known Cliffy Hockey", a nickname given to him by former Providence Bruins teammate, Kenny Agostino.

The twenty-four years old defenseman reportedly earns $0.7 million as base salary from the team and has an estimated net worth of $0.5 million as of 2019. Furthermore, he is dating his long-time girlfriend, Amanda Thompson.

How Much Is Connor Clifton Net Worth? Know His Salary and Contract

Clifton, 24, is neither married nor single. Currently, the hunk is in an open relationship with his long-time girlfriend, Amanda Thompson. The couple started dating before 2013. 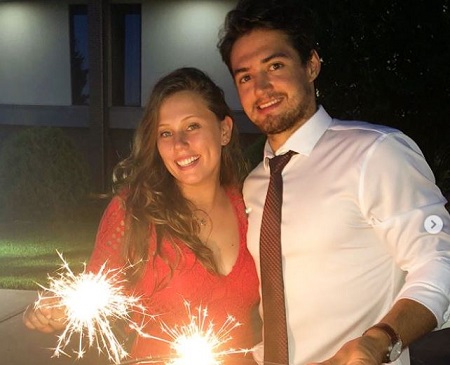 A native of Long Branch, New Jersey, U.S. Connor Clifton was born on April 28, 1995. His star sign is Taurus. Further, he holds an American nationality and belongs to the white ethnic background.

He was raised in Matawan, New Jersey, where he played prep hockey at Christian Brothers Academy together with his brother, Tim.

Having played in his draft-eligible year within the U.S. National Development Team Program, Clifton was initially drafted by the Phoenix Coyotes in the fifth round, 133rd overall, of the 2013 NHL Entry Draft.

Moreover, he enrolled at Quinnipiac University and played for the college team. Following his senior season and un-signed from the Coyotes, Clifton signed with the Boston Bruins American Hockey League affiliate, the Providence Bruins.

On May 3, 2018, Clifton was signed to a two year NHL contract by the Boston Bruins. On November 16, He made his NHL debut against the Dallas Stars after being recalled on an emergency basis.

Furthermore, he recorded his first NHL point with an assist on a Noel Acciari's goal, in a 7-3 win over the Florida Panthers on March 23, 2019. Similarly, his first NHL goal came in Game 2 of the Eastern Conference Final against the Carolina Hurricanes, as part of a 6-2 rout.