Christopher John Osgood is a Canadian retired professional ice hockey goaltender. During his playing stint, he spent the first part of his 17 years NHL career with the Detroit Red Wings, then the New York Islanders, and the St, Louis Blues prior to returning to Detroit in 2005.

As of now, the three Stanley Cup championships serve as Red Wings studio analyst and part-time color commentator for Fox Sports Detroit. He has an estimated net worth of $3 million in 2022.

Chris Osgood Net Worth and Salary

He reportedly earned $24 million over the course of his 16 years in the NHL with annual average earnings of about $1.5 million.

Chris Osgood, 49, is a happily married man. He tied the knot with his girlfriend Jenna Osgood but the exact date of the wedding and details of their courtship is unavailable. Together with his wife, he has three children; 2 daughters named Sydney and Mackenzie and a son called Max. 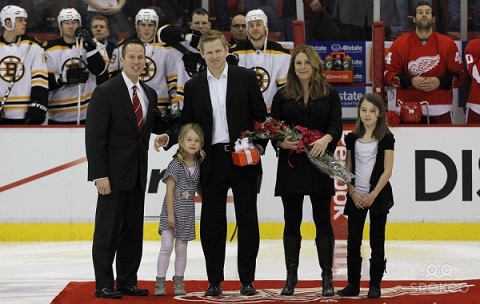 Chris Osgood and Jenna Osgood with their children SOURCE: marriedbiography.com

Till the date, there is no news and rumors of conflict, extra-marital affairs, and divorce in their relationship. Thus, the couple is living a blissful life with their three children.

A native of Peace River, Alberta, Chris Osgood was born on 26th November 1972, to Joy Osgood and John Osgood. His star sign is Sagittarius. As per nationality, he is Canadian and his ethnicity is white.

In the 1991 NHL Entry Draft, Chris Osgood was picked in the 3rd round as the 54th overall by the Red Wings. He made his pro debut in the 1993-94 debut. Furthermore, he became the 4th goaltender to man the crease for Detroit that season alongside Peter Ing, Vincent Riendeau, and Tim Cheveldae.

Moreover, Osgood played 17 seasons for the Detroit Red Wings, winning three Stanley Cup championships with two of them coming while he was starting goaltender.

On 28th September 2001, he was acquired by the New York Islander. There he helped the Islanders to a playoff berth where they lost a seven-game series to the Toronto Maple Leafs.

On July 19, 2011, Osgood announced his retirement from ice hockey but remained with the Wings as the assistance of his former goaltending coach Tom Danko.

In September 2013, he was hired as a Red Wings game and studio analyst for Fox Sports Detroit, replacing Larry Murphy. Primarily, he provides analysis in the studio, but also replaced Mickey Redmond on select road games throughout the season.

As of August 2016, Osgood stands as a part-owner of the Ontario Hockey League’s Saginaw Spirit. Osgood serves as a goaltending and general consultant to the team.