Torey Lavar Krung popular as Torey Krung is an American ice hockey defenseman who is currently signed to Boston Bruins of the National Hockey League (NHL). Being undrafted, he played a season with Indiana Ice of the United States Hockey League and then switched to Michigan State University.

In 2012, Krug won the CCHA Player of the Year Award as well as named a finalist for the Hobey Baker Award. Let's take a look at his wiki to gain information regarding his career, net worth, personal life, family and more.

Torey Krug Net Worth and Endorsement

Torey Krug has an estimated net worth of $10 million as of 2019. The significant source of Torey Krug's net worth is his professional hockey career as he has not disclosed any information regarding his other income generating business.

In 2017, Torey Krug signed a four-year $21 million contract with the Boston Bruins, which includes $21 million guaranteed with an annual average salary of $5.25 million. Till the date, Krug has taken home $22,967,115 from Bruins.

On 18th August 2012, Krug took a giant step in his life proposing his college girlfriend, Melanie Flood, on her birthday, on a carriage ride through New York’s Central Park. Soon after a positive response, both of their families made the trip which made them closer.

After being engaged almost 11 months, both decided to take their love life to a whole new level and got married on 5th of July 2013, in the East Lansing area of Michigan. Their wedding ceremony was elegant, attended by friends, family, and their college teammates. 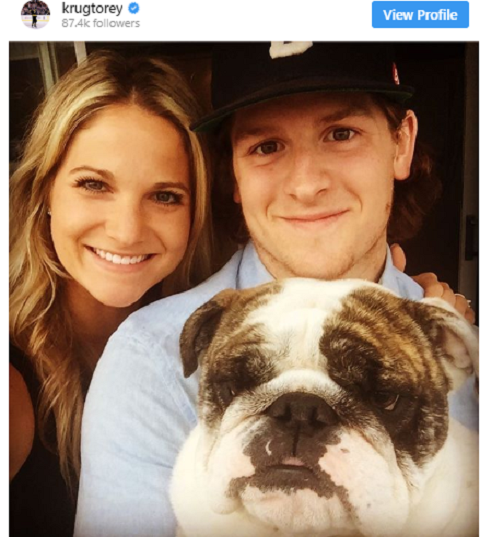 The spark in their love life is still alive and they frequently share their adorable pictures via Instagram and Twitter. They own a pug whom they threat like their child and most of the time carry with them while going out.

As of 2018, it’s been almost five years for their marital relationship, but there is no rumor about conflict, extra-marital affairs, and divorce.

Torey Krug was born on 12th of April 1991, in Royal Oak, Michigan, United States. His birth sign is Aries. Regarding his nationality, Krug is an American and he belongs to white ethnicity. He was raised up by his parents: Cheryl and Kyle Krug alongside his siblings, Adam, Matt, and Zak.

Growing up outside of Detroit, Torey Krug was naturally a huge Red Wings fan, watching the likes of Henrik Zetterberg, Nick Lidstrom, Pavel Datsyuk, and Steve Yzerman. He attended Michigan State University and graduated with a political science degree in May 2017.

A product of Belle Tire Midget program in Michigan, Krug joined Indian Ice of the USHL after undergoing undrafted in 2008 NHL draft. In the 2008-09 season with Indiana Ice, he made overall 59 games appearances, recording 10 goals, 37 assists, with 47 points.

In the fall of 2009, Torey Krug joined Michigan State University and was initially slotted as a 5th or 6th defenseman on the roster. During his freshman year, he was voted to the CCHA’s All-Rookie Team.

Torey Krug promptly earned a name as one of the CCHA’s utmost offensive performers, and in advance of his sophomore season, was elected captain of the Spartans. Additionally, he was voted the CCHA's Top Offensive Defenseman and named to the First Team All-CCHA as a sophomore.

In his third season, Torey Krug was awarded the All-CCHA Team for the second time, as well as named Hobey Baker Award finalist. Through the season, he was the topmost scoring defenseman in the CCHA. After the season the hockey player was released as free agents.

On 25th of March 2012, Krug signed his first professional contract with the Boston Bruins. On 3rd April of the same year, he made his NHL debut against the Pittsburg Penguins.

Further, Torey Krug spent the 2012-13 season with the Providence Bruins. His first NHL goal came during his first Stanley Cup playoff game in the Eastern Conference Semi-finals against the New York Rangers.

The ice-hockey player began the 2013-14 season on the Bruins’s opening night roster. On 25th of November, in a match against the Pittsburgh Penguins, he scores an overtime goal, which proved to be his first NHL game-winning goal. He finished the season playing in overall 79 games.

On 30th June 2016, Krug extended his contract with Boston Bruins, re-signing a 4-year contract worth an AAV of $5.25 million. He finished the 2016-17 season being 2nd among the team in assist and 6th in total points.

While playing in the “2018 Stanley Cup playoffs”, Torey Krug was injured in a 4th game against the Tampa Bay Lighting and was later ruled out for the rest of the game. Krug suffered a different injury to his left ankle in the last 2018-19 pre-season game against the Philadelphia Flyers. He is currently in out for a three week period for recovery and re-evaluation.