Gossip Know All About Football Coach Sean Mcvay's Relationship, Find Out If Sean Mcvay Is Married Or Has A Girlfriend, How Hot Is Sean's Partner?

Know All About Football Coach Sean Mcvay's Relationship, Find Out If Sean Mcvay Is Married Or Has A Girlfriend, How Hot Is Sean's Partner?

Sean McVay is an American born football coach currently serving as the head coach of NFL's Los Angeles Rams. He got hired by the team in 2017 when he was 30 and since then he is the youngest head coach in the history of modern NFL. Currently 32-years-old, McVay from 2014 to 2016 served as the offensive coordinator of the Washington Reskins.

While his achievements in football are quite massive, coaching A-list players like Todd Gurley, Jared Goff, Aaron Donald, Brandin Cooks, etc., it is not the only thing he gains attention for. Recently, the football coach is in limelight because of his girlfriend who is very hot.

So, without further ado, let's find out about his sexy girlfriend, if they are married and his past affairs.

As we have already mentioned above, Sean McVay's career is not the only thing for which he is making headlines. As of 2018, the football coach is all over the news because of his hot Ukranian girlfriend Veronika Khomyn who is a model and a fitness enthusiast.

The best love is the kind that awakens your soul; that makes us reach for more, that plants the fire in our hearts and brings peace to our minds.

Veronika Khomyn has a very voluptuous figure which she loves to flaunt in bikinis and the couple is getting a lot of attention because of it. People are literally going crazy over how McVay was able to snatch such a sexy woman in his life.

Moving along, taking a closer look at the duo's social media, it seems that they opened up about their relationship in 2016, as their oldest social media pictures date back in the year. Yet the exact detail about how they met or when they started dating is a mystery.

Meanwhile, according to some sources, Khomyn came to the United States with her beau Sean and is currently living in his $2.7 million worth mansion.

I love you babe. You deserve the world

The couple has been spotted by paparazzi on vacation numerous times and there are hundreds of pictures of them attending events together or just out on a date night. A plus to their relationship is that there are no rumors about the duo splitting and their relationship also seems to be going very smoothly.

However, at the same time, despite being together for a few years now, we still have not seen a ring on Khomyn finger. Likewise, neither of them has spoken about their plans of getting engaged or married. It seems that we will just have to wait till Sean pops the question to Khomyn.

Who has Sean McVay Dated In The Past: His Affairs

Los Angeles Rams' head coach Sean McVay is quite open about his current relationship with girlfriend Veronika Khomyn. But looking at his relationship history, it seems that Khomyn is the only girlfriend in his life whom he has been open about.

Other than Khomyn, there are no records of him dating someone. Matter of fact, there are not even any rumors which claim that he has had an affair with someone. 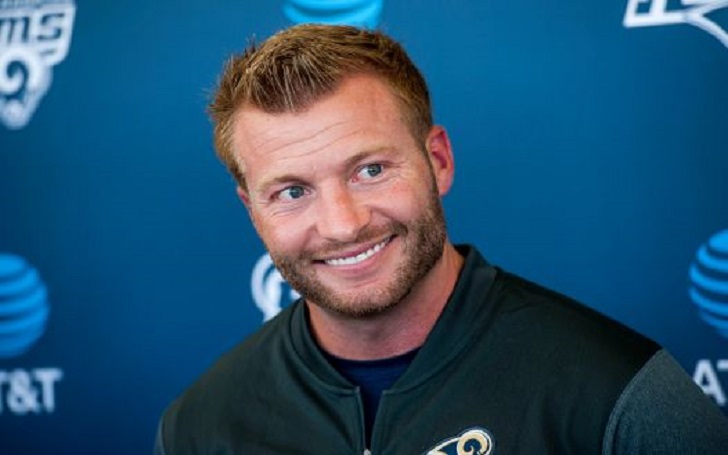 It has been just a few years since McVay started dating Khomyn so, it is very hard to believe that he did not date anyone in the past. So, it is safe to assume that the head coach is also very strategic when it comes to keeping his past affairs under wraps from the public.