Claire Smith is a famous sports journalist currently working for ESPN. She is a known tv sportscaster and mostly appears on the sports news edition. Other than working for ESPN, she also worked for Hartford Courant, New York Times and The Philadelphia Inquirer.

The resident of Ellington, Connecticut, Claire Smith, reportedly earns around $85,000, as her yearly salary from the network, and as of 2018, she reportedly has an estimated net worth of over $1 million. Details about her husband/boyfriend were not disclosed yet but she has a son named Joshua.

Claire Smith was born in Langhorne, Pennsylvania to parents William and Bernice. As per her nationality, she is American and belongs to Mixed ethnic group.

Claire's father is was an illustrator and sculptor, besides, her mother was a chemist working for the General Electric. 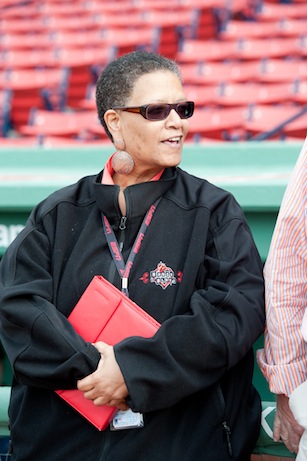 She got her starting job as a journalist in the Bucks Courier.

Claire Smith Net worth and Salary

Claire Smith is one of the most popular ESPN anchors who has made a successful career as a sports anchorman.

As ESPN is a popular Sports Network, it is well known for paying a heavy amount of salary to its sportscasters. Since Claire Smith is a regular ESPN anchor, she earns a decent amount of salary from the network.

American sportswriter Smith started her career by covering the New York Yankees from 1983-87. She worked for the Hartford Courant as the first female Major League Baseball beat writer. In addition, Claire worked forNew York Times as their columnist from 1991-98 and for the Philadelphia Inquirer as their editor and columnist.

Currently, she works as a news editor for ESPN. Claire was removed by the San Diego Padres from the visitor's clubhouse after the first game of the 1984 National League Championship Series.

Later, Steve Garvey, San Diego's first baseman, left the clubhouse, told her she still had a job to do and conducted an interview. Peter Ueberroth, the newly appointed Baseball Commissioner, declared a new rule the next day requiring equal access for all major locker rooms.

The famous sports journalist Claire Smith credits her mother Bernice for sparking her interest in baseball. In addition, Claire has a caring and supportive family.

There is no information about her relationship/affair with anyone. Smith is a career-focused woman and she always remains far from controversies and rumors. Her personal life is not disclosed to the public yet, but it is found that she has a son named Joshua.

Other than being a famous journalist, Claire is quite popular in social media with a large number of followers. She is fond of writing since her childhood. Moreover,  she has still kept the typewriter that her father gifted her.

Claire has a height of around 6 feet, but her body measurements are not available.

Claire's source of inspiration is her parents, and Rachael and Jackie. Besides, she is the diehard fan of Dodgers.

She currently, lives in Ellington, Connecticut, along with her family, and has a beautiful home there.