CJ McCollum is an American professional basketball player who plays in the National Basketball Association (NBA). As of 2018, CJ McCollum currently plays for the Portland Trail Blazers as their Shooting guard. CJ McCollum has played for another team like Idaho Stampede in 2014.

As a Shooting guard, CJ McCollum reportedly earns around $25,759,766 as his yearly salary from the Portland Trail Blazers. Further, CJ McCollum has an estimated net worth of over 29 million.

CJ McCollum was born on September 19, in 1991. His father's name is Errick McCollum I and his mother's name is Kathy Andrews. As per his nationality, he is American. Further, his star sign is Virgo. He grew up along with his brother named Errick McCollum. He is also a professional basketball player. 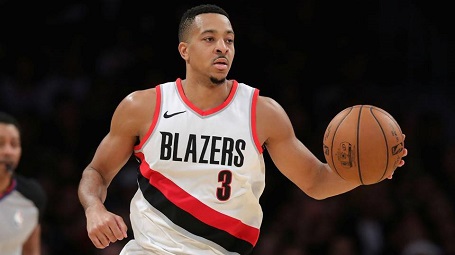 CJ McCollum was named the Gatorade Ohio Player of the Year for the 2008–09 season. After completing high school, CJ McCollum enrolled at Lehigh in 2009 and played for the Lehigh Mountain Hawks men's basketball.

CJ McCollum averaged 19.1 points and 5.0 rebounds per game. He was also named as conference player of the year and made Patriot League history.

Later he increased his averages to 21.8 points and 7.8 rebounds per game as a sophomore.

CJ McCollum has a basketball family which seems that he has big support from his family members.

CJ McCollum also has a girlfriend named Elise Esposito. He has been dating her for several years. In fact, she is a graduate of the same university where McCollum was enrolled, Lehigh University.

But there is no any news of them on planning for marriage. It seems as if they are taking their time for a special moment.

CJ McCollum's Salary and Net Worth

As of 2018, CJ McCollum has an estimated net worth of over $29 million. He reportedly signed a four-year contract with Portland Trail Blazers in 2013 which guarantees an annual salary of $25,759,766.

Other than being a famous NBA  player, CJ McCollum is pretty famous in social media and has 884k followers on Instagram, 50k likes on average and  273 followers on twitter with 1,597.

Here are some facts on CJ McCollum