Chris Olave is an American college football player from the United States who is currently playing in the Football Bowl Subdivision of the NCAA. He plays in the wide receiver position for Ohio State Buckeyes. He is in the Senior class of Ohio State University. He was named in the First Team All-Big Ten in 2020 and 2021.

Olave went to play high school football at Mission Hills High School. He was rated as a 4-star recruit by 247 Sports and 247 Sports also ranked him in the Number 54 wide receiver of the nation.

Chris Olave was born on June 27, 2000, in San Ysidro, California, the United States under the birth sign Cancer.

He was born to his mother LaCausha Olave and mother Raul Olave. He is pretty much closed to his mother and once posted his photo with his mother wishing her on birthday. He praised her hard work and dedication to give him the best she could. He grew up along with his 2 siblings brothers Isiah Olave and Joshua Olave.

Besides playing football, he is also active in running tracks. He ran tracks during his time at Missions Hills High School. He committed to play for Ohio State University in 2018.

His weight is recorded to be 85 kg and has short black hair ad a black beard.

Olave's net worth and Salary

As per sources, the estimated net worth of Chris Olave is estimated to be $20,000. But the athlete has never confirmed his earnings and paycheck.

His main source of income is from sponsors and deals rather than playing professional football. 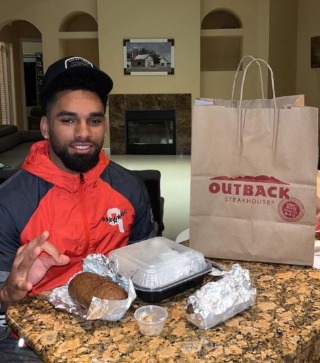 Read: What is the Net worth of Andre J? (Contract and Salary)

One of his major sponsors is Outback Steakhouse, which provides different fast food items. He announced the partnership with Outback on his Instagram. He wrote,

"@Outback hooking it up with the best eats for watching the game tonight! Order the Chris Olave meal in the @Outback app. You won't be disappointed. #OutbackTeamMATES"

Who is Olave's girlfriend?

Chris Olave is single in 2022 and not dating anyone. He has never mentioned anyone as his girlfriend on his Instagram. 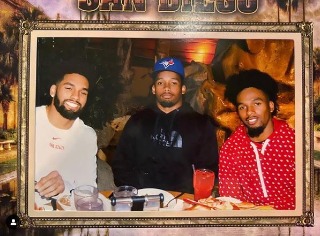 Read: The relationship status of Damien

He is a close person who is focusing more on his career rather than spending time with girlfriends and partners.

Olave Chris is very much active on his Instagram. His Insta Id is @chrisolave_ and has more than 159,000 followers.

He shares photos related to his personal time, games and time with family on his Instagram.