As a Small forward, Chandler Hutchison reportedly earns around $1,991,520 as his yearly salary from Chicago Bulls.

Chandler Hutchison was born on April 26, 1996, in Mission Viejo, California to parents Charles Hutchison and Tanya Hutchison. As per his nationality, he is American and belongs to African ethnic group. Further, his star sign is Taurus.

Hutchison was drafted by the Chicago Bulls with 22nd overall pick in the 2018 NBA draft. He along with Wendell Carter was selected by Chicago Bulls in the first round selection of 2018 draft.

Furthermore, he officially signed with the Bulls on 3 July 2018. He made his NBA debut in a loss against Philadelphia 76s, playing for only 3 minutes. 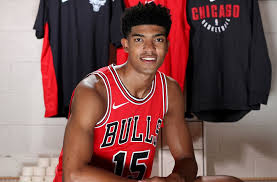 Currently, he is playing along with Robin Lopez, Cristiano Felicio, Lauri Markkanen and many more.

Some of his Career highlight and awards are:

Chandler Hutchison Net Worth And Salary

As of 2018, He reportedly signed a contract with Chicago Bulls. Further, the NBA player has an average salary of $1,991,520 annually.

His projected salary for the next four seasons are:

Moreover, he is the 13th best-paid player of Chicago Bulls while Jabari Parker, Zach LaVine, Robin Lopez is among the highest paid player.

Currently, his net worth is estimated to be around a higher order six-digit figure.

Chandler Hutchison doesn't like to talk about his private life in the media, and he didn't yet confess about his probable wife or girlfriend.

The Famous NBA star is 6 feet 7 inch in height and weighs around 89kg. Chandler Hutchison is not only a world-class athlete but also has a very attractive individual.

Other than being a famous NBA Small forward, Chandler Hutchison is pretty famous in social media, having 29.8k followers on Instagram and 10.5k followers on Twitter.