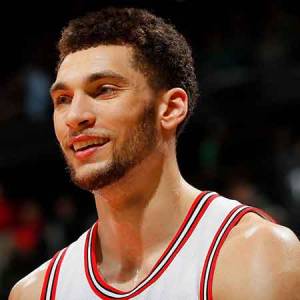 Zach LaVine is an American professional basketball player who plays in the National Basketball Association (NBA). As of 2019, Zach LaVine currently plays for the Chicago Bulls as their Point guard. Zach LaVine has also played for other teams in the past.

As a Point guard, Zach LaVine reportedly earns around $19,500,000 as his yearly salary from Chicago Bulls. Further, LaVine has an estimated net worth of over $14 million. Know more about his personal life below.

Zach LaVine's Net Worth and Salary

All for my family! A lot of hard work and long hours. I have a lot to to do moving forward, but today is a beautiful day for me and my loved ones.

Kept aside LaVine financial earnings, his personal assets include mansion Valued 3.25 million in Chicago and a supercar. Further, the NBA Player earns a good amount of money from various sponsorships.

LaVine is currently in a relationship with Hunter Mar since high school. She is a sensational Instagram model.

Apart, Zachary LaVine was born to athletic parents. His father, Paul LaVine had played American Football professionally in USFL and NFL and mother was a softball player. Being raised in a sporty surrounding LaVine Developed his interest in basketball after seeing Michael Jordan in Space Jam.

Facts and stats of Zach LaVine

Zach LaVine is not only a world-class athlete but also has a very attractive individual. The Famous NBA star stands 6 feet 5 inch tall and weighs around 91 kg.

Zachary LaVine was born on March 10, 1995, in Renton, Washington, to father Paul LaVine and mother Cheryl Johnson-LaVine. As per his nationality, he is American and belongs to a mixed ethnic group. Further, his star sign is Pisces. He grew up along with his siblings, Camryn LaVine, Linda Carter, and Chandi Leishman.

Happy Birthday mom Love you, Appreciate everything thing you do!

LaVine attended Bothell High School in Bothell, Washington and he played for his high school basketball team where he held an average of 28.5 points, 3.4 rebounds, and 2.5 assists per game in his School career.

Minnesota Timberwolves signed Zach LaVine on June 26, 2014, with the 13th overall pick in the 2014 NBA draft. During the 2014-2015 season when Ricky Rubio was injured indefinitely, LaVine became the starting point guard over Mo Williams. He became the only second teenager ever in the NBA to have at least 25 points and five assists as a reserve in a 120-119 win over the Los Angeles Lakers.

During the 2015 NBA All-Star Weekend, LaVine won the Slam Dunk Contest and became the youngest champion since an 18-year-old Kobe Bryant in 1997.

LaVine was traded, along with Kris Dunn and Lauri Markkanen to Chicago Bulls in exchange for Jimmy Butler and Justin Patton on June 22, 2017.