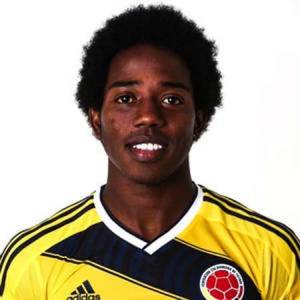 Sánchez Moreno is a professional footballer from Colombia. He currently plays as defensive midfielder for National Team of Colombia and Spanish club Espanyol on a loan from an Italian football club, ACF Fiorentina.

Sanchez was named as La Roca (The Rock), due to his strength on the pitch. First, eleven ISM is the agent of Carlos Sanchez Moreno.

Carlos Sánchez Moreno was born as Carlos Alberto Sanchez Moreno on February 6, 1986 in Quibdo, Colombia. He holds a Colombian nationality.

In 2015, Sanchez's market value was estimated to be around €6.00 million and currently, he has a market value of €2.50 million. He earns around $1.27 million as an annual salary form his current club. He is the brand ambassador for Nike.

With his progressive career, Sanchez has a net worth of about $4 million.

During his youth career, Moreno spent two years with Danubio from 2003 to 2005 where he was a teammate of Edinson Cavani. On January 1, 2005, he was transferred to River Plate Montevideo where he made 40 appearances scoring 1 goal during his two-year spell.

Sanchez agreed to a four-year deal with Aston Villa for €3.7 million and made his debut replacing Charles N’Zogbia against Newcastle United.

He scored his first goal for the club against Manchester City on April 25, 2014. He left the club after making 48 appearances and 1 goals scored.

Sanchez later moved to Serie A side, Fiorentina on August 9, 2016, on a two-year loan contract and made his debut on August 20, 2016, in a 2-1 win against Juventus. His first goal came on August 28 against Chievo.

Sanchez then permanently signed by Fiorentina on July 1, 2017, with the transfer fee of €3.00 million. He was immediately sent on loan to Espanyol which keeps him until June 30, 2018.

Carlos Sánchez Moreno made his international debut with the National Team of Colombia with whom he played in Copa America, World Cup, International Friendlies and World Cup Qualification.

Sanchez earned his first senior cap under the coach, Jorge Luis Pinto on May 9, 2007, in a 4-0 victory against Panama.

Sanchez played in the 2015 Copa America where he was awarded man of the match for “dominating” Neymar in the 1-0 victory over Brazil in Santiago. He is supported by Abel Aguilar during the international games.

Moreno is married to his beloved wife, Noelia Polvoria May 2010. The couple is blessed with two children named, Benjamin born on October 31, 2015, and Cataleya born on August 4, 2013.

The pair was first introduced each other in Montevideo and soon will be celebrating their 8th marriage anniversary. Noelia is a painter by profession.