Besides playing for several football clubs across the world he has represented Colombia in their youth teams and made his international debut for the senior team in 2004.

He also a younger brother Alvaro Aguilar in his family.

Abel Aguilar’s Net worth and Salary

Abel Aguilar’s net worth gained through his playing career can be assumed be more than $900,000 and is enjoying a comfortable and happy life with his accumulated earnings.

He started his professional career with Deportivo Cali in 2002 and made over 100 appearances for the club as well as scoring three goals for the team.

Abel signed with the Italian club, Udinese Calcio in 2005 and was transferred to clubs such as  Ascoli, Xerez, Hercules, and  Zaragoza on a loan.

After his playing stint got over at Udinese, he returned back to Spanish football club, Hercules CF and signed a four-year deal with the club. After the team suffered relegation, he was transferred to the fellow Spanish club, Deportivo de La Coruna during 2012/13 season.

He then signed with the French club, Toulouse CF on a three year deal on 22 August 2013 and made his debut against SC Bastia. After an average performance for Toulouse, he signed with Portuguese side, C.F. Os Belenenses in 2016.

He is currently playing for his old club, Deportivo Cali whom he signed a three-year contract on 12 June 2016 and scored his first goal against America de Cali on 29 July 2016.

Serving as the captain of Colombian national at the U-17 and U-20 levels, Abel Aguilar helped the Colombian to take the third position at the FIFA World Youth Championship in 2003 He made his senior debut during Copa America 2004.

He scored his first international goal against Peru on 12 July 2004 at 2004 Copa America.

Abel Aguilar played along midfielder, James Rodriguez, defender, Cristian Zapata and striker, Carlos Bacca at the 2014 FIFA World Cup at Brazil and also helped the team to reach the quarterfinals.

Currently 32, Abel Aguilar stands 6 feet 1 inches tall and weighs about 80 kg. He was previously married to Natalia Restrepo on April 8, 2014.

The cause of the split according to his wife Natalia was due to Abel, not be being able to fulfill his marital duties, abandonment of home and psychological abuse. The divorce was finalized in 2017. 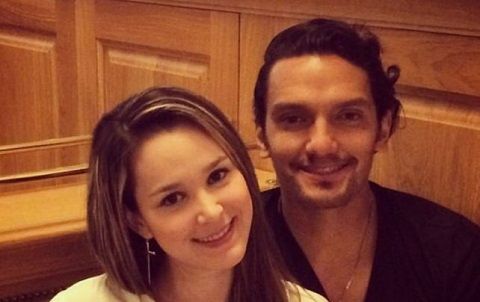 Aguilar and Natalia first started dating each other in 2012. His former wife was a journalist by profession but later quit the job at Win Sports to be with him.

Currently, he might be single or could be in a relationship with some other woman. They both have not deleted each other's photos shared on their social media.