Carlos Alcaraz is a rising Spanish professional tennis player. He is currently playing in the ATP and ITF tour events. Carlos turned professional in 2018 and is among the fast-rising young talents in the WTF. Alcaraz has won one title in his singles career until 2021.

Carlos Alcaraz was born Carlos Alcaraz Garfia on May 5, 2003, in El Palmar, Murcia, Spain. He is among the four children born to Carlos Alcaraz Sr and his wife, Virginia Alcaraz. Carlos has three siblings named Alvaro, Sergio, and Jaime. Much about his formal education and academic qualification is under the radar. Alcaraz stands six feet and one inch tall and weighs 72 kg.

Carlos Alcaraz has an estimated net worth of more than $500,000. He has accumulated most of his net worth through his short and successful career in tennis. Alcaraz has not disclosed his earnings through his sponsorship and advertising deals. Carlos signed with a racquet sponsor (Babolat) and a sports clothing company (Lotto) right after turning sixteen. He has a sponsorship deal of shoes with Nike. 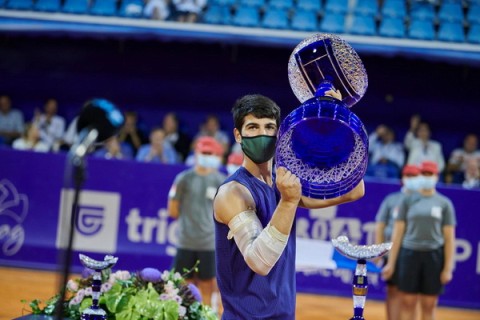 Carlos must have earned a huge sum before turning professional in 2018. Alcaraz has gained most of his net worth in the ongoing season of 2021. Carlos had already made $563,531 while from his Singles games and $6,423 from Doubles. Alcaraz has total career earnings of $664,590 from his tennis career. He is very much early in his career and will be making millions in the future.

Carlos is an active social media user who shares pictures of his games, training, vacations, family, and friends. Alcaraz has successfully kept his relationship status away from the public. He has not shared a word about having a girlfriend to date. Carlos is believed to be single as of 2021. The Spanish player is very much early in his career and must be focusing on his career.

Some online sources claim Carlos to be dating Maria Gonzalez Gimenez for more than a year. None of them have confirmed their relationship status in public.

Carlos started playing tennis along with his father from his early days. He had signed with numerous brands at the age of twelve. Alcaraz is regarded among the young promising players. The Spanish tennis player made his  ATP main draw debut at the 2020 Rio Open. He started the event with a win but lost in the next round. 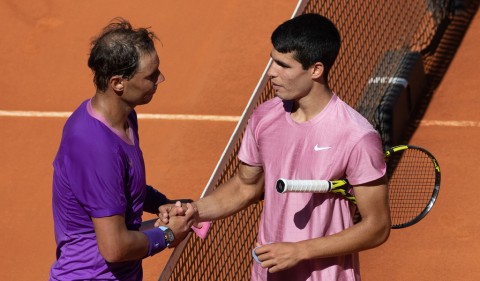 Carlos shares a word with Rafael Nadal after the Madrid Open SOURCE: Tennis365

Carlos played in the ATP Challenger And ITF Futures finals in 2019 and won his first singles title at the ITF Denia against Timofei Skatov. In early 2021, Alcaraz qualified for the main draw of the Australian Open, making him the youngest participant in the men’s singles.

In 2021 Wimbledon, Carlos lost the match against Daniil Medvedev in the second round. At the US Open, Alcaraz defeated world No. 3 Stefanos Tsitsipas in a fifth-set tiebreak to reach the fourth round in the biggest win of his career. His only single ATP title came in July 2021 at the Croatia Open after winning the finals against Richard Gasquet. In August 2021, Carlos peaked at his career-highest ranking of No.54.