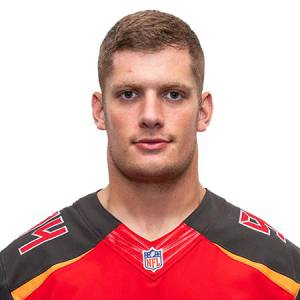 Carl Nassib is an American professional Football player who plays in the National Football League (NFL). As of 2019, Carl Nassib currently plays for the Tampa Bay Buccaneers as their Defensive end. Previously, he played for Cleveland Browns for a year after being picked in the 3rd round of the 2016 NFL Draft.

Carl Nassib currently earns $899,716 as his annual salary and reportedly has an estimated net worth of $1.5 million. Moreover, there aren't any reports about his relationship

His contract and salary, including bonus and incentives:

Unlike his professional Career, it was a tough task to find out about his personal life. Further, he has kept his personal life low profiled and hasn't dropped a single hint about if he is a relationship or not. 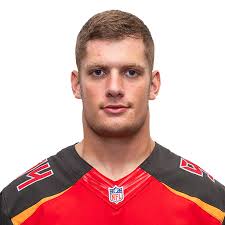 Additionally, there aren't any rumors about his past affairs or relationships in the media yet. However, the famous NFL player might be in a secret relationship with his probable wife or girlfriend.

Carl Nassib was born on April 12, 1993, in West Chester, Pennsylvania to father Gilbert Nassib and mother Mary Nassib. As per his nationality, he is American and belongs to the White ethnic group. Further, his star sign is Aries.

His father, Gilbert Nassib played football at Delaware University. He has four siblings, including two sisters, Carey and Paige, and two brothers John and Ryan.  Ryan has played college football at Syracuse University and has been an NFL quarterback and is currently a free agent.

In the third round of the 2016 NFL draft, Nassib was selected by the Cleveland Browns with the 65th pick. On June 28, Nassib signed a four-year contract with Cleveland Browns.

Nassib recorded one sack, three tackles, and one defended a pass in his first game as a professional, against the Philadelphia Eagles, and earned a nomination for  Pepsi NFL Rookie of the Week. Later, he was waved by Browns on September 2, 2018.

The Tampa Bay Buccaneers offered a contract to  Nassib  September 3, 2018. Currently, he is playing under the guidance of the coach Bruce Arians, playing along with his star team-mates such as Ali Marpet, Lavonte David.